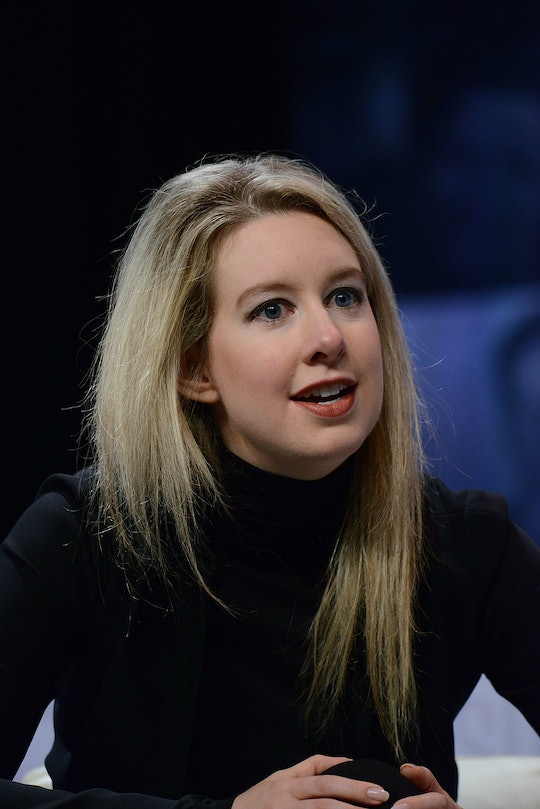 I have been somewhat obsessed with Elizabeth Holmes since I tore through John Carreyrou’s account of her Theranos scandal in Bad Blood. I had never known of a woman who decided she wanted to do something, convinced wiser and richer men to get on board with her plan, and then, when it all blew to pieces because she had built her company on lies, secrets, and a tyrranical workplace culture, refused to admit guilt, sorrow, or defeat. Elizabeth Holmes is not sorry for what she has done, or failed to do (since the medical device she had duped others into believing was real never worked as promised), and that fascinates me.

I’m intrigued by her because she was a female CEO, a rare thing, but instead of being a pioneer as one, she shaped her corporate identity to match those who have come before her in the entrepreneurial space: namely the men. Her uniform of black turtlenecks was consistent with the wardrobe of her idol, Steve Jobs. Also consistent with Jobs was the kind of dictatorial rule to which she subscribed. Steve Jobs was notoriously cold and demeaning to employees, leading to his firing from Apple. But Steve Jobs was branded a genius by our society, proving we are, as a capitalist culture driven by wealth, willing to dismiss abhorrent behavior if it’s part of the get-rich recipe. We can’t seem to point to any male leader who reached a coveted level of success, and was also “a nice guy.”

The trouble is, we've mostly been fine with that… until there’s a lady at the helm.

Rightfully, Elizabeth Holmes has been lambasted in the media because she, along with her boyfriend and COO, Sunny Balwani, cheated and lied and created such a toxic environment at Theranos that they are now awaiting trial on 11 criminal felony counts. America has had plenty of men behaving badly in business, but there has never been a woman worth billions in the news before. That’s why she became the subject of a book, a podcast, a documentary, and two fictionalized accounts of her rise and fall currently in development. I don’t think a movie on her work life would have been made if she was still on top, which was the case with The Social Network, based on Mark Zuckerberg’s success. The story we can’t get enough of is that of fantastic female failure. Holmes was a self-made female billionaire, who fell catastrophically from grace, and now shows no remorse.

In a way, I can’t blame her. I mean, who of the male CEOs who have come before her, after whom she modeled her behavior, offered apologies to the employees they abused in their rise to the top? She was only drawing from the examples offered, and those examples were male.

Can women lead differently? There is simply not enough data to offer a comparison.

It wasn’t until I was almost two decades into my career that I reported to a fellow working mom.

In my career in TV, I have mostly had male bosses, if not as my immediate supervisors, then always as my department and company heads. If I wanted to learn how women lead, I had to attend networking happy hours, or sign up for webinars, or ask to attend female leadership conferences. I needed to put in hours outside the work day to gain exposure to the small pool of female executives willing to reach behind them to lift up other women. Men learned on the job, from the male leaders around them. Women seeking more relatable examples had to look elsewhere.

This is not to say I didn’t have excellent male role models. I definitely did, and I put their leadership teachings into practice at work, and sometimes at the home when I’m breaking up fights between my kids. But it wasn’t until I was almost two decades into my career that I reported to a fellow working mom. And she was just as relieved to have another working mom on the team as I was. Though we had different working styles and professional strengths, we had an unspoken bond. When our lives crept into the work day, with a call from school about a sick kid for example, we covered each other with zero resentment. It was something I just hadn’t had with any of my previous supervisors. It was as if I was finally able to breathe as my whole self at the office. I no longer had to compartmentalize work and life; she gave me permission to allow those parts of me to co-exist. And I, in return, made an effort to normalize my role as a parent in the office, as an example to the women, and the men, coming up behind me.

As a working mom in a managerial position, I feel it’s my responsibility to lead by example. I want women, and men, to feel like they can be their whole selves in the office. We can be productive, and “nice.” The two traits are not mutually exclusive. But it’s going to be probably another generation until we see significant changes in workplace culture. Men have had been at the helm of industry since its inception. We only know how the world works with mostly men in charge.

By the time my son and daughter are entering the workforce, I am optimistic they will have a broader range of role models from whom they can learn. Hopefully, there will be a wider variety of best professional practices from which they can pick and choose. I have to wonder if Elizabeth Holmes might have plotted a more wholesome course towards executing her vision, if she had more examples of what healthy leadership looked like. Instead of mimicking an evil genius as an acceptable prototype for success, she could have seen the value in creating a nurturing environment. I don’t feel sorry for her; she made her own mess. But I am worried that until we achieve parity with more women in leadership roles, we will continue to hold up patriarchal patterns as the sole examples of entrepreneurial success, and I am skeptical of how good that is for women.