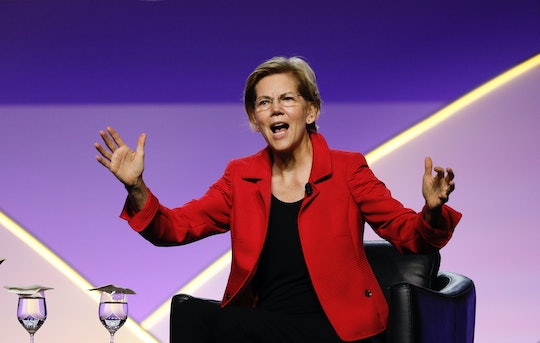 During the second round of Democratic debates on Tuesday evening, presidential candidates tackled major policy issues, including health care, immigration, and gun violence. However, some of the most powerful moments during the debate happened when the candidates were asked about the country's escalating racial tensions. Like the boss that she is, Sen. Elizabeth Warren called out white supremacy at the debate, making for one of the most memorable moments of the night.

In reference to the tragic shooting in Gilroy, California, Warren was asked about the rise of white supremacy and what should be done to curb it. "We need to call out white supremacy for what it is; domestic terrorism, and it poses a threat to the United States of America," she responded. "We live in a country where the president is advancing environmental racism, criminal justice racism, economic racism, health care racism, the way we do better is to fight back and show something better."

Warren went on to explain her plan to curb white supremacy, which includes education initiatives for minorities. "I have a plan, for example, on education that says we have to build a better education system for all our kids, but we've got to acknowledge what's happened on race," Warren said at the debate. "So, my plan has universal tuition-free college for all our kids, but also increases the Pell Grants and levels the playing field by putting $50 billion into historically Black Colleges and Universities. It cancels student loan debt for 95 percent of the kids with student loan debt and helps close the Black-white wealth gap in America."

Unlike some of her Republican colleagues in the Senate, Warren has been vocal in condemning white supremacy. During a CNN town hall last March, when an audience member asked her what she would do to unite the country in light of President Donald Trump's racially divisive statements and remarks, she said the first step is calling out racism when you see it.

"We have got to recognize the threat posed by white nationalism," she said, according to The Hill. "White supremacists pose a threat to the United States like any other terrorist group, like al Qaeda, and leadership starts at the top. And that means you’ve got to call it out."

She also said that if she were to win, she would suggest that the Department of Justice prosecute white supremacists when they commit a crime. “As president of the United States, you have got to use the tools available to you," Warren added at the March town hall, according to CNN. "And that means get the Justice Department, when they break the law, to go after them with full prosecution."

The candidates who were asked about race during the debate responded with respectable answers, but hearing Warren call white supremacy "domestic terrorism" was especially powerful. Overall, Warren landed some of the strongest moments of the night, and if she makes it further in the race, which current polls suggest she probably will, voters will undoubtedly get to hear more from her about race relations, and her policies to improve them.