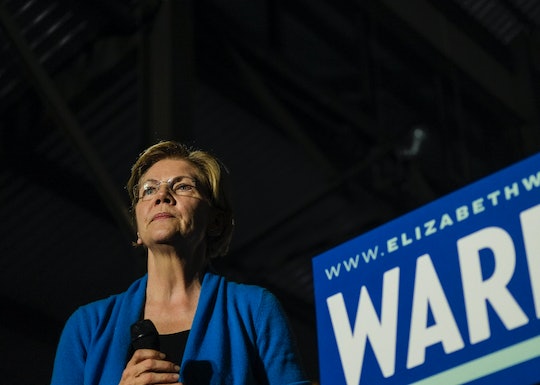 After a disappointing Super Tuesday showing, Sen. Elizabeth Warren has decided to end her presidential campaign, according to multiple reports. The Massachusetts senator's campaign had centered around progressive policies like Medicare for All, universal child care, and canceling student loan debt, but ultimately failed to draw in voters.

"I want all of you to hear it first, and I want you to hear it straight from me: Today, I’m suspending our campaign for president," Warren told staffers in a call early Thursday, according to a transcript of that call shared by her campaign.

After suffering a series of defeats in early primary contests, Warren reportedly trailed frontrunners Joe Biden and Bernie Sanders in Super Tuesday contests, garnering only a small portion of delegates and losing her home state. NBC, CNN, The Los Angeles Times, and The New York Times were all among the first to report that Warren planned to announce the suspension of her presidential campaign sometime on Thursday. The news comes just one day after Warren's campaign revealed she was taking time to "assess the path forward" and "think through the right way to continue this fight."

"Elizabeth believes in her ideas and in the big, structural change that is badly needed to root out corruption in Washington and will decide what she thinks is the best way to advance them," Warren's campaign said in a message shared with supporters Wednesday.

According to CNN, Warren announced plans to suspend her campaign early Thursday on a call with campaign staffers. Warren's campaign later shared a transcript of that call on Medium. "I know that when we set out, this was not the call you ever wanted to hear. It is not the call I ever wanted to make," the transcript reported Warren said. "But I refuse to let disappointment blind me — or you —to what we've accomplished. We didn't reach our goal, but what we have done together — what you have done — has made a lasting difference."

Among Warren's campaign policies was a plan to address the country's maternal mortality crisis through a series of reforms like bundled payment models aimed at addressing structural racism in healthcare and improving care coordination. A plan to partner with local providers to make child care affordable for everyone (and free to many) aimed to better support kids and families. Warren's campaign also featured plans to fund public schools "adequately and equitably" to ensure every student has access to a "high-quality" public education, and pass a federal paid family or medical leave policy that saw workers receive 66% of their salary for up to 12 weeks.

Reports of Warren's plan to suspend her campaign were greeted with disappointment and frustration among her supporters. "That sound you hear is hearts are breaking all over as @ewarren drops out of the race," president of NARAL Pro-Choice America Ilyse Hogue tweeted Thursday. "[Warren] is a principled visionary and a steadfast warrior. She has worked tirelessly for justice and for women and families and I know that she will continue to. We have nothing but love and deep admiration for her offering her service."

It was unclear early Thursday if Warren would endorse one of the remaining candidates in the Democratic presidential primary when she announced her campaign's suspension. In her call with campaign staffers, Warren vowed that the fight was not over. "I may not be in the race for president in 2020, but this fight — our fight — is not over. And our place in this fight has not ended," she said, according to a transcript of that call. "And sure, the fight may take a new form, but I will be in that fight, and I want you in this fight with me. We will persist."