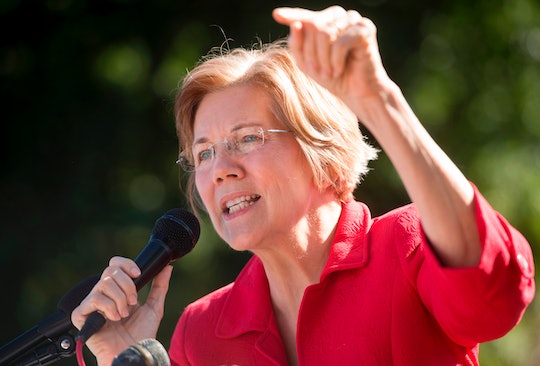 The notion of "having it all" as a woman has evolved plenty over the years. For example, Elizabeth Warren revealed how she struggled as a working mom because it's truly a battle for everyone. Yeah, even one of the United States' most badass politicians has gone through the existential question of whether to work or stay at home with her child. And that precise decision is something so many women have to think about on a daily basis — and it isn't easy. Sure, the idea of "having it all" might seem alluring, but it's much more complicated than it may seem, as Warren knows first-hand.

Delivering a speech at the 45th anniversary gala at the National Women’s Law Center on Wednesday night, Warren talked about all of the difficulties she faced as a young, working mother. Specifically, she discussed the fact that finding a suitable child care option wasn't easy and it almost caused her to stop working altogether.

And, she wouldn't have been the first woman to face this. According to a report from The New York Times in 2015, "61 percent of women said family responsibilities were a reason they weren’t working, compared with 37 percent of men."

For Warren, making that decision was almost inevitable. After graduating college, she became a special needs teacher, a job she completely loved, she said in her speech. But, as she said, "by the end of the school year, I was pretty obviously pregnant." And because of this, Warren said she lost her job and someone else was hired. Obviously, that mistreatment of women is ridiculous, but, unfortunately, that isn't even the worst part of the story.

After this, Warren said she decided to stay home. She "tried desperately to be a good wife and mother," even though she "desperately wanted something more." So, Warren eventually decided to go to law school, despite how "crazy" the idea was to just about everyone around her.

Nevertheless, she persisted. She made a game-plan, got accepted into Rutgers University, and paid her tuition. But then, she said, "I hit the one big boulder that nearly crushed me: child care."

At the time, Warren's daughter was 2 years old, and she had to figure out a child care solution if she wanted to go to law school. But finding somewhere suitable for her daughter wasn't easy.

"They cost a fortune, or they smelled funny, or the kids looked miserable," she said of the places she came across on her child care hunt. She did finally find a place to put little Amelia in, but she had to potty train her first.

Then, three years later, after graduating law school and getting pregnant with her second child, Warren discovered that not many law firms were looking to hire a pregnant woman who had just graduated. After staying home with her children for some time, she got a job teaching law. But then, her babysitter quit, and Warren was once again without child care.

Warren explained in her speech that she was anxious, stressed, and felt like she was failing without a child care solution. She really thought she was going to quit her job, until her Aunt Bee stepped in, and told her "I can't get there tomorrow, but I can come on Thursday." And she did, with suitcases, her dog, and a built-in child care provider for Warren. She stayed for 16 years.

It's because of Aunt Bee that the world has a Sen. Elizabeth Warren. She said at the event:

I'm a United States Senator today in part because my Aunt Bee rescued me on that Thursday in 1979. Without child care, I was a goner. And I know how lucky I was because so many working moms don't have an Aunt Bee who can fly in and help out.

Unfortunately, Warren's story isn't a blip on the radar. Far too many women have to choose between having a career and having a family. And even for those who can afford child care, there isn't always a viable option nearby. According to the Center for American Progress, "More than half of the population across the 22 states studied — 51 percent — live in neighborhoods classified as child care deserts," which are areas where there are no child care facilities nearby.

Right now, child care isn't an issue many politicians feel inspired to tackle, except for Warren, who has said previously, according to The Washington Post, that one of her goals is "to fight for universal pre-K, and to make it easier for every family to get child care."

As Warren's story and those of countless other parents prove, child care is an issue that is still in desperate need of attention.