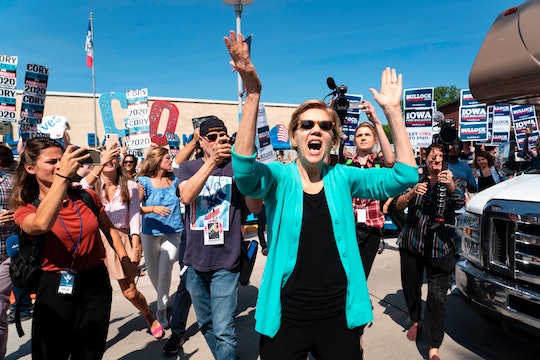 Wake up at 0600h, grind through hours of nonstop labor subsisting on Krispy Kremes, hit the sack at 0130h, then do it all again the next day. This is not parenting, though it could be — it's a description of the campaign trail by David Foster Wallace from 2000. Famously grueling, the campaign trail briefly claimed Hillary Clinton's lungs in 2016, and saw Sen. Bernie Sanders suffer a heart attack earlier this year, while I ask you to decide for yourself if campaigning killed poor old William Henry Harrison. Life on the road is hard, but for Sen. Elizabeth Warren, it's "definitely" still easier than raising small kids.

"Come on, raising small children is 24 hours a day no matter what," Warren told Romper from a town hall stop in Virginia, in an interview published on Romper's Instagram account alongside her op-ed on public education. "Besides, the campaign? It’s actually a lot of fun."

Putting aside the fact Warren has a staff of strategists to help with tough decisions, press secretaries to keep her message consistent, and roadies helping throughout the day, there are very real reasons that parents in 2019 have a much harder time than the crop of candidates currently out in the field — not least of which is the fact that parenting duties extend far beyond November 3, 2020.

Here's why today's parents really do have it harder.

The Overall Workload For Mothers Has Grown

In a four-decade review of time use, a 2006 study, Changing Rhythms of American Life, found that mothers today spend at least as much time actively parenting their kids as in the past, but have increased workloads outside the home. The result: mothers working as many as 98 hours a week per a study commissioned by Welches (take with a grain of salt and glass of cranberry juice), while candidates working long hours on the trail can of course at least nap on the bus.

In the final months of a presidential campaign, candidates skate by on as little as four hours of sleep — around 1-and-a-half sleep cycles in newborn baby terms, for the parents playing along. But parents overall have candidates beat on sleep deprivation, with a 2019 Sleep study finding an immediate loss of 6 months' sleep, and parents' sleep quantity not returning to normal for six years after baby.

"Whereas in situations of job burnout, people may be put on sick leave or quit their job, there is no such way out in situations of parental burnout," wrote the researchers behind a 2018 paper in Frontiers of Psychology that looked at burnout in the parents of healthy (as opposed to sick) children. That is, things going well, parents are exhausted, stressed, lonely, and prone to dissociation, with no exit strategy.

While mothers can expect a loss of $16,000 in income each year due to the effects of the "motherhood penalty" in the workplace, per the National Women's Law Center, even failed presidential candidates often find a financial windfall in the exposure they received through a national campaign, along with a bulging war chest. Former Sen. Evan Bayh used $10 million in leftover campaign funds from 2010 to fund a 2016 campaign, as Open Secrets reported at the time — which he was legally permitted to do.

The Costs Are Massive, & Don't Stop When The Kids Grow

Parents spend between 9 and 22% of their annual income on childcare, per Economic Policy Institute data cited by The Conversation — often more than they do on rent. Merrill Lynch estimates that parents of adult children spend around $500 billion on their grown offspring each year, with parents spending in general somewhere around the quarter-million mark on each child, or two-and-a-half plates at a fundraiser for Donald Trump or Hillary Clinton, if you want to be fancy — and you'd better believe that on those plates, there isn't a chicken nugget in sight.