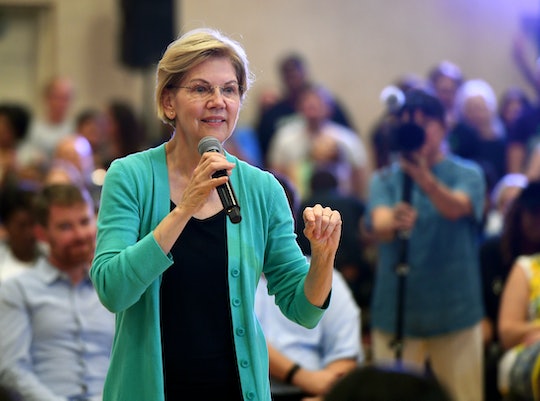 Protecting Abortion & Reproductive Rights? Elizabeth Warren Has A Plan For That

The 2020 Democratic presidential primary kicks into high gear later this week as 20 candidates head to Michigan to take part in the race's second debate. Hosted by CNN, the latest Democratic primary debate will likely see candidates discuss a wide range of issues. And one topic abortion advocates in particular are eager to see brought up is Elizabeth Warren's plan to protect abortion and reproductive rights. Earlier this year, the Massachusetts senator released an aggressive plan to guarantee abortion access even if recent conservative attacks on Roe v. Wade succeed.

The 2020 presidential hopeful rolled out a series of comprehensive policy proposals aimed at strengthening and expanding reproductive rights across the country In a self-published blog posted to Medium in May, shortly after Alabama passed a near-total ban on abortion. And while Warren noted that "the next president can begin to undo some of the damage" restrictive anti-abortion laws and recent efforts to undermine women's health care had caused, she stressed that Congress could play a major role in the fight now.

In establishing federal statutory rights to protect abortion, Warren argued that Congress would invalidate anti-choice laws like Alabama's recent ban. What's more, she claimed that establishing these rights on multiple constitutional grounds, including equal protection and the commerce clause would ensure patients' abortion rights even if the Supreme Court's landmark ruling in Roe v. Wade was overturned.

Warren also called on Congress to pass The Women’s Health Protection Act, a bill that would effectively block state legislators from being able to pass Targeted Regulations on Abortion Providers (TRAP) laws designed to restrict or limit access to abortion at the state level.

The 2020 presidential hopeful also urged Congress to guarantee that women of all income levels have access to reproductive health care by repealing the Hyde Amendment, which blocks federal funding from covering abortion services in government programs like Medicaid; passing the EACH Woman Act, which would prohibit restrictions on abortion care from being established in private insurance plans; and authorizing a Medicare for All system, effectively making health care accessible for all Americans.

However, as Warren's plan relies so heavily on Congressional action, it will have a tough chance of success unless Democrats capture a majority of seats in both the House and the Senate. Despite that fact, she has remained an ardent supporter of her plan. And when asked about her position on abortion rights at the first Democratic primary debate in June, she called for protecting them under federal law. "It's not enough for us to expect the courts to protect us," Warren said at the time, according to The Atlantic. "We now have an America where most people support Roe v. Wade. We need to make that a federal law."

If given the chance, Warren will likely reaffirm her support for enshrining abortion and reproductive rights into federal law during the primary's second debate. Due to a crowded field of candidates, the second Democratic primary debate has been scheduled to take place over the course of July 30 and 31. According to CBS News, Warren is set to participate in the first night of the debate.