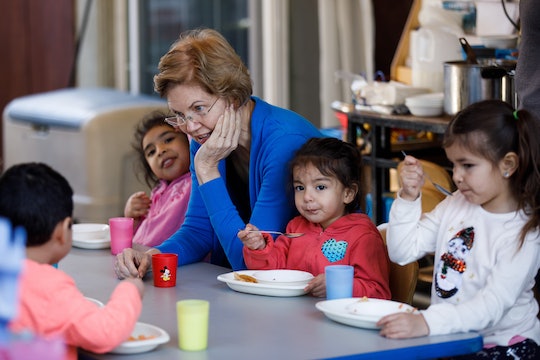 While voting can be a fun family activity, it can be a bit trickier to caucus with kids in tow. Unlike state primaries that happen at the ballot box, caucuses can be long and involved affairs and it can be difficult to keep children quiet and suitably occupied in a room bustling with activity. As a result, some parents have often felt disenfranchised from caucuses. But it turns out Sen. Elizabeth Warren's campaign has a plan for that. To help make it easier for parents of young children to participate in Monday's caucus events, Warren's campaign is offering Iowa caucusgoers free child care, according to a recent report from CNN.

"Accessibility and opportunity are important to our campaign, and we do everything we can to make sure everyone who wants to can volunteer and participate on caucus night," Warren's Iowa communications director Jason Noble told Bloomberg.

While the child care is offered free of charge to parents in the Iowa City area, CNN reported that parents would be asked to provide any supplies their child might need, such as diapers and wipes, and acknowledge that any toys brought could be lost or broken. Parents would also be reportedly asked to certify that their child is, to the best of their knowledge, not sick. The final section of the Warren campaign's child care agreement asked parents to sign off on their children potentially watching a G or PG rated movie and staying up past their normal bedtime, according to the news outlet.

Additionally, Warren's campaign offer doesn't appear to be limited strictly to the Massachusetts senator's supporters, although the campaign does ask parents to, "Talk to your child(ren) about the importance of democracy and why we love Elizabeth Warren," according to CNN.

Warren has previously unveiled a universal child care plan that promised "high-quality child care and early education for every child in America" up until they hit school age. Under Warren's plan, which would be financed by her proposed wealth tax, families that make less than 200% of the federal poverty line would be provided with free child care while those whose income falls above that line would be offered a rate capped at no more than 7% of their income.

"It will be free for millions of American families, and affordable for everyone," Warren wrote in a Medium post of her plan. "This is the kind of big, structural change we need to produce an economy that works for everyone."

Iowa kicks off the 2020 Democratic primary with more than 1,600 caucuses held across the state Monday night.