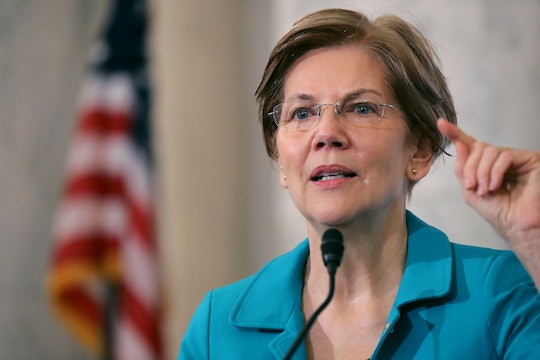 Parents across the United States struggle to pay for quality child care. Faced with astronomical prices and subpar services, many choose to stay home with their children rather than work. But Elizabeth Warren's child care initiative seeks to address both the cost and the quality of child care in America, as CNBC reported, bringing universal services on a sliding income scale that can better suit tight budgets.

Warren addressed her universal child care initiative on Tuesday, which is designed to ensure high-quality care for every family, as HuffPost reported. The plan is to pay child care providers with federal funds, ensuring that no family would have to pay more than 7 percent of their household income on child care, regardless of the number of children they have, as CNBC reported. Those families whose combined incomes are below twice the poverty line — meaning around about $51,500 a year for a family of four — would receive free child care, according to CNN.

An early analysis of the plan suggested that it will require approximately $700 billion in new federal spending over 10 years, according to Bloomberg. In order to offset the cost of the initiative, Warren plans to pull from revenue generated by her proposed new tax on wealth, according to CNN.

But affordability isn't the only issue Warren is addressing with her proposal. In order to ensure the quality of care children are receiving, Warren's plan would reportedly require providers to meet federal safety, staffing and curriculum standards in order to qualify for the funding, as HuffPost explained. The standards are similar to those that currently apply to the Head Start program and the U.S. military’s child care system, according to Bloomberg. The change in standards would include mandatory training for caregivers, regular safety inspections, as well as a dramatic increase in pay.

Qualifying child care centers would be required to pay their caregivers salaries that are comparable to what public school teachers in their areas earn, according to CNBC. Glassdoor, one of the world’s largest job and recruiting sites, reported that daycare workers in the United States earn, on average, less than $25,000 per year. In comparison, according to Glassdoor, the average salary of a public school teacher in the U.S. is $47,263 — nearly double. The idea behind paying workers more is that greater pay will attract more qualified candidates, who in turn will be more dedicated to providing the high quality care that Warren is looking for, according to Bloomberg.

In an email sent out to her supporters across the country, Warren laid out who would make up the approved child care providers: "a mix of locally licensed child care centers, preschools and in-home child care facilities with governments, school districts, nonprofits, tribes and faith-based organizations to create a network of care options," according to HuffPost. The decision-making would be left to local communities, but the level of care would be held to national standards, Warren said in the email.

As a working mother herself, Warren knows the struggle of finding quality child care well. During her 2017 keynote speech at the National Women’s Law Center, Warren explained how she was impacted by this struggle. "We cycled through one child care arrangement after another and every transition sent me into a near panic, every time it represented a failure," she said. And despite all of the positive changes in the lives of women like herself, Warren described the lack of affordable health care as an "obstacle facing working women," she said:

Two years later, Warren has suggested a solution to that obstacle. Her child care initiative would guarantee that families have child care from birth until children's entry into school, regardless of their income or the number of children they have.