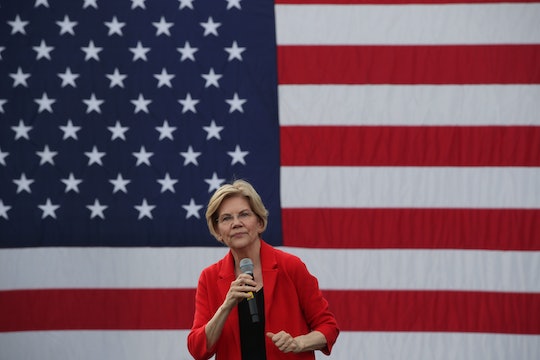 Elizabeth Warren's platform for the 2020 presidential election continues to make waves. Just yesterday, the 2020 Democratic hopeful announced how she'd address the current humanitarian crisis at the border. As she laid out in a blog post for Medium, Elizabeth Warren's immigration reform plan offers several "humane" solutions to help fix the broken system.

The Democratic Sen. from Massachusetts unveiled her plan for immigration reform on July 11. In the Medium post, Warren stated that she not only plans to reverse President Donald Trump's current immigration policies, but would also expand legal immigration and provide cost-effective security at the borders, ultimately creating a "rules-based system that is fair, humane, and reflects our values," Warren wrote.

This plan is broken down into six different pillars. By focusing on immigration reform, Warren wants to do the following:

Most importantly, Warren's plan would decriminalize immigration, making these offenses civil violations, rather than criminal violations, according to TIME. This plan still tackles all of the immigration issues in the United States at large, but takes a humanitarian approach to them, as CNN explained.

Her plan also addresses Trump's policies head on. "We must address the humanitarian mess at the border and reverse the president's discriminatory policies," she wrote on Thursday. "But that won't be enough to fix our immigration system. We need real reformation that provides cost-effective security at our borders, addresses the root causes of migration, and provides a path to status and citizenship so that our neighbors don't have to live in fear."

Eliminating fear is a big part of Warren's immigration plan. In the post on Medium, Warren expressed her desire to keep law enforcement and immigration enforcement separate, reshape ICE, as well as protect immigrants in "sensitive locations," like schools, hospitals, and courthouses, so law enforcement can't ambush them there.

Perhaps most importantly, she wants to get rid of private detention facilities and pare back on detention overall, according to Vox, putting an end to the separation of parents and children. There are currently about 54,000 immigrants in detention centers, according to Mother Jones, and Warren hopes to significantly reduce that number, especially when it comes to children and those who are vulnerable. "Separating parents and children and detaining families and other vulnerable populations is not only staggeringly expensive and inhumane, but it has no deterrent effect."

In May, Trump announced a proposal that would prioritize "merit-based immigration", according to NPR, limiting the amount of people who can get green cards, and "attract and retain the best and brightest immigrants." But his plan would also prioritize building and finishing a border wall between the United States and its southern neighbor.

Warren's plan, however, firmly believes in the power of immigrants, allowing them to build an "achievable pathway to citizenship," as BuzzFeed News explained. "We should provide English, civics, and employment-focused classes and training for immigrants who want to enroll, and work with faith groups and other community organizations to provide services for refugees and asylees, providing the tools to make it easier for newcomers to integrate into their communities," Warren wrote in her post.

Warren's immigration reform plan fully addresses the immigration problems in the United States right now. But instead of approaching these issues with fear and hate, Warren is coming from a place of understanding and compassion.