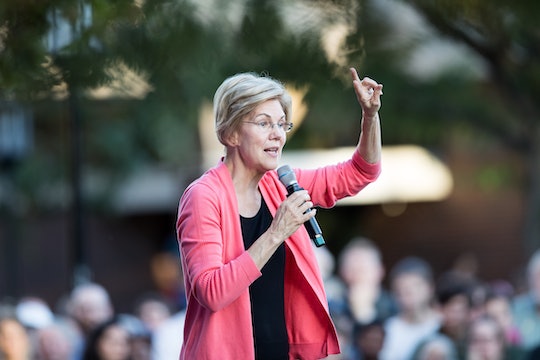 After being criticized for not having a detailed plan for K-12 public education, the 2020 presidential candidate well known for having plans, finally has a plan for that. Sen. Elizabeth Warren unveiled a public education plan Monday that would use her campaign's signature wealth tax to quadruple funding for public K-12 schools over the course of 10 years. Warren's plan would also end federal funding for the creation of new charter schools and see a public school teacher named education secretary.

"Funding for public K-12 education is both inadequate and inequitable," Warren wrote in a blog post outlining her plan for public education. "I've long been concerned about the way that school systems rely heavily on local property taxes, shortchanging students in low-income areas and condemning communities caught in a spiral of decreasing property values and declining schools."

According to Warren, linking public school funding to local property values has served only to maintain the effects of housing discrimination and racist housing policies, something the former public school teacher can't get behind. "I believe that every kid in America should have the same access to a high-quality public education — no matter where they live, the color of their skin, or how much money their parents make," she wrote.

In an effort to address what she called "the vastly unequal state of public school facilities," Warren said she would use a two-cent wealth tax on fortunes greater than $50 million to invest "hundreds of billions" into public schools. Under Warren's plan, federal Title I funding would be quadrupled over the course of 10 years and public education leaders and school finance experts would be consulted regarding the funds' allocation.

Warren's plan also called for investing an additional $100 billion over 10 years in "excellence grants" that would enable schools and school districts to cover the cost of student-focused resources and programs like art labs and afterschool art or mentoring programs. Warren said she would also invest an additional $50 billion in school infrastructure, targeting schools in serious need of repairs first.

"The vastly unequal state of public school facilities is unacceptable and a threat to public education," Warren wrote. "We cannot legitimately call our schools public, when some students have state-of-the-art classrooms and others do not even have consistent running water. The federal government must step in."

All told, Warren's plan called for funneling an additional $800 billion in federal funding to public education, according to the Wall Street Journal. But along with boosting funding, Warren's public education plan also called for increasing transparency and accountability requirements of charter schools while banning for-profit charter schools and ending The Federal Charter School Program (CSP), which funds the creation of new charter schools. She pointed to a Washington Post report that showed the Trump administration had "wasted" upwards of $1 billion funding charter schools that never opened or were opened and then quickly closed. "The Federal Charter School Program (CSP), a series of federal grants established to promote new charter schools, has been an abject failure," she wrote. "As President, I would eliminate this charter school program and end federal funding for the expansion of charter schools."

In her plan, Warren also called for eliminating standardized testing altogether, but especially as a factor for determining whether to close a school, fire a teacher, or any other "high-stakes decision." She also vowed to better integrate public schools across the country, strengthen discrimination protections for students, and protect the rights of LGBTQ students and English-language learners.

You can read Warren's full plan for public education here.