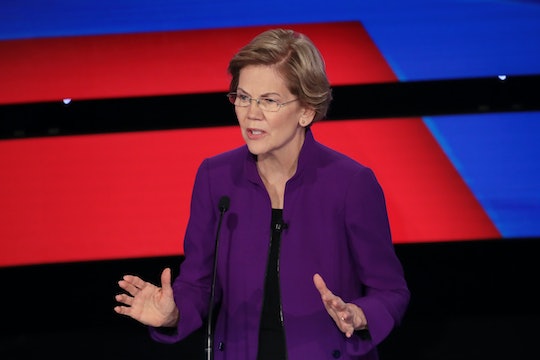 An escalating disagreement between two presidential candidates has forced one question into the forefront of the Democratic primary: Can a woman defeat President Donald Trump in 2020? After days of back and forth over allegations that Sen. Bernie Sanders once told Sen. Elizabeth Warren he didn't believe a woman could win, the matter finally came to a head at Tuesday's Democratic primary debate in Iowa. While Sanders has maintained he never made such a statement, Warren used the topic to shine a light on her, and another woman's, qualifications. In fact, Warren's response to whether a woman can beat Trump served as a powerful refresher of the facts at hand.

"This question about whether or not a woman can be president has been raised, and it's time for us to attack it head-on," Warren said Tuesday during the Democratic primary debate in Des Moines, Iowa. "I think the best way to talk about who can win is by looking at people's winning record."

The Massachusetts senator then proceeded to do exactly that. "So, can a woman beat Donald Trump?" she continued. "Look at the men on this stage. Collectively, they have lost 10 elections. The only people on this stage who have won every single election that they've been in are the women: Amy [Klobuchar] and me."

Election records from Ballotpedia show that, in 2012, Warren defeated incumbent Republican Scott Brown to become one of Massachusetts' two state senators. She easily won re-election in 2018. According to Elle, Klobuchar first ran for public office in 1998, when she was elected Hennepin County attorney. She was reelected in 2002 without opposition. In 2006, she was elected to the U.S. Senate representing Minnesota. She has since been reelected twice, once in 2012 and then again in 2018.

But while Warren was happy to provide voters with a refresher on both her and Klobuchar's election track record, she also agreed with Sanders that it was more important to approach the 2020 election by asking "how do we defeat Trump" and not "can a woman do it."

Still, Warren maintained that, historically, the Democratic Party has long been involved in establishing presidential firsts, and so she saw no reason the party couldn't bring the country its first female president. "Back in the 1960s, people asked, 'Could a Catholic win?' Back in 2008, people asked if an African American could win," Warren said. "In both times, the Democratic Party stepped up and said yes, got behind their candidate, and we changed America."