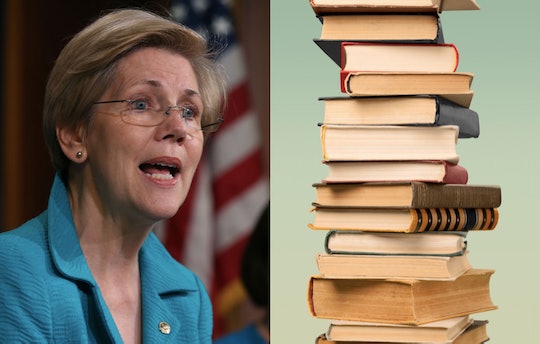 As the 2020 presidential race gains momentum, top contenders are already stepping forward with game-changing platforms that could attract voters and lead to sweeping policy change. Among them is Sen. Elizabeth Warren from Massachusetts, whose recent proposals have suggested that the Democratic 2020 candidate is enthusiastic about bringing real policy reform to the table. For example, as The New York Times reported, Warren unveiled a student debt and college tuition plan that would channel $1.25 trillion over the course of a decade to reshape higher education.

In a Medium post published on Monday morning, Warren revealed one of the most comprehensive education reform plans of the Democratic 2020 runners. The multi-pronged approach would cancel up to $50,000 in student loan debt for 42 million Americans and wipe out student debt entirely for more than 75 percent of the indebted population. Her plan would also allow students to attend public colleges and universities for free, ensuring debt-free education that she calls “a basic public good.”

The reform package also addresses accessibility and affordability for minority communities, including Black and Latinx populations, in an effort to close the wide racial wealth gap remaining after decades of discrimination and injustice.

“We also need to start fixing our higher education system so it better serves lower-income families and communities of color,” Warren wrote in her Medium article. “We must do more to correct these historical injustices and to ensure that opportunities are fairly available to everyone.”

Black and Latinx students are underrepresented at America’s top public colleges and universities, according to the Center for American Progress. Black students are also currently nearly 20 percent more likely to need federal student loans and on average owe more than their original student loan balance 12 years after obtaining a degree, according to the Center for American Progress. Unique to Warren’s plan is a fund for HBCUs and Minority-Serving Institutions (MSIs) that would have a minimum of $50 billion, open to increases by discretion of the Secretary of Education.

The plan would draw its funding from Warren’s previously outlined Ultra-Millionaire Tax plan, which would increase taxes on the top 0.1 percent of Americans. The tax on approximately 75,000 of the wealthiest Americans is projected to bring in $2.75 trillion in revenue over the course of 10 years.

This isn’t the first time the Massachusetts senator has pushed for education reform. The first bill Warren introduced as senator in the 113th Congress in May 2013 was the Bank on Student Loan Fairness Act, which would provide financial relief to students with loans. Another bill, the Bank on Students Emergency Loan Refinancing Act, that she introduced in 2017 would have allowed students to refinance their loans and reduce their monthly payments.

Most recently, according to USA Today, Warren successfully pushed to include $350 million in a spending bill last March that would allow for a student loan forgiveness fund.

Now, the presidential candidate is pushing similar kinds of policies to help her stand out from the competition in the 2020 race to the White House. If elected to office, her platform promises sweeping change to a higher education system that many agree is broken.

More Like This
Louisiana Candidate Katie Darling On Giving Birth In Her Viral Campaign Ad
Kids With Head Lice Don't Need To Miss School, AAP Stresses In Updated Guidelines
Barack Obama Says He "Won The Lottery" When He Married His Wife Michelle 30 Years Ago
How To Help Families Impacted By Hurricane Ian