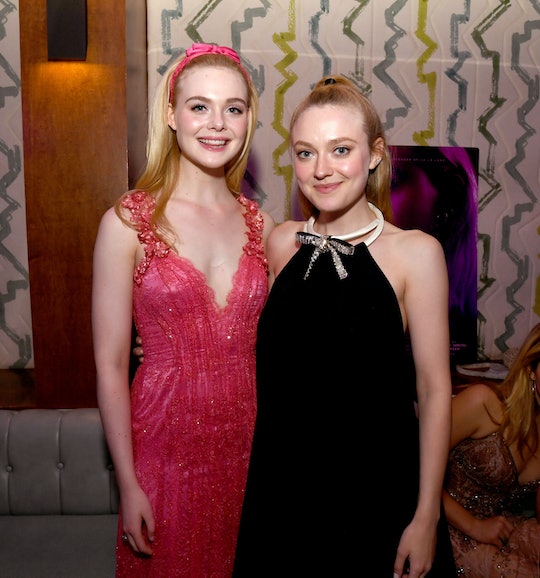 Home videos tend to be priceless, especially when it involves a beloved celebrity sister duo. One perfect example? Look no further than Elle Fanning's Halloween throwback video with sister Dakota Fanning, in which they adorably squabble and mess with each other. Not only is the video hilarious, but it will likely ring true for anyone who has a sister.

In the video shared by now 21-year-old Elle, a young version of herself and Dakota are shown "getting ready for a girl’s night out," as the actor noted in her post. This translates to the then kid sisters getting dressed as Raggedy Ann (Elle) and a cat (Dakota) for Halloween, which yielded some hilarious results. "No Elle, that's my stuff," Dakota tells her curious little sister as she tries to rummage through her makeup bag. This is followed by a clearly impatient Dakota telling Elle, "I have to do my eyebrows!" But sweet Elle persists, holding up the eyebrow brush and adorably asking, "What's this?" To which Elle responds, "It's for your eyebrows, and you're not allowed to do it!"

As Elle continues to fumble around (classic toddler), Dakota has had enough, shouting, "Go get your wig back on!" in reference to the sibling's missing costume piece. The clip is funny from start to finish and is the perfect case study of sister bonding.

Needless to say, there are a ton of amused reactions in response to the throwback clip. "This is the best thing on film," someone joked, while another person commented, "This may be the best video of all time!!!!!!!" Agreed on all fronts, folks.

Although Dakota and Elle have grown up in the public eye, the two definitely still have many everyday sibling moments off-screen. Earlier this year, for instance, the two enjoyed their downtime together in Hollywood's Universal Studios theme park, where Dakota was celebrating her 25th birthday.

Elle posted another throwback on her Instagram for her sister's celebration of completing quarter century, posting a photo of the two curled up on the couch as kids with blankets and a stuffed animal. In the post, the youngest Fanning hinted at just how close the two were as kids.

"Cody is 25 today. We celebrated together last night and are continuing to celebrate all day today!!" Elle posted. "I feel most complete and most at ease when you are home with me. Here's to many more years of making 'pallets' on the couch and watching our shows. I love you so much. Halfway to 50."

Dakota "Cody" Fanning has also expressed her love for Elle before, noting how tight the two are. In a celebratory post for Elle's 21st birthday, for example, Dakota posted, "21 TODAY @ellefanning ! Hard for me to believe. It feels like yesterday that I woke up in the little cot next to Mom in the hospital, and asked 'What is it?' Meaning did I have a new baby brother or sister?"

She continued, "As we know, I had a sister, and my life got better in that instant. I will always be there to zip up your dress (and maybe hold your hair back tonight just kidding!!) and help you in every way I can. I LOVE YOU!"

Although the two have grown up on-screen and continue to entertain the rest of the world, whether it's via their entertainment projects or through their hilarious home videos that everyone can relate to, it's clear they value their sisterly love off-screen above all else.