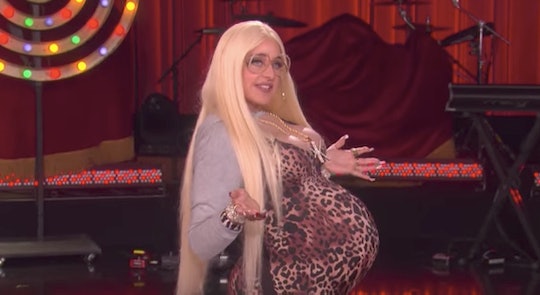 Just in time for Halloween, Ellen DeGeneres showed up in full costume — and in full character — as she addressed The Ellen DeGeneres Show's audience members, who were all decked out for the holiday, too. The talkshow host/comedian waltzed onto stage sporting a leopard-print bodysuit, a blonde wig, fake nails, and sparkly bling. Reviving a beloved (and fictional-but-hilarious) character, Ellen DeGeneres' Karla Kardashian costume pokes fun at the Kardashian baby boom. And it's golden.

"Oh, I'm sorry I made you wait. My nail broke backstage, so I Scotch-taped it on. So I hope that holds.," DeGeneres begins her 7-minute skit, which was uploaded to the show's YouTube channel this morning. She continues:

I don't know if you remember me; I'm Karla Kardashian. I'm the lesser-known Kardashian sister, and I've got a new baby bump under my lady lumps. You know what that means: I'm either pregnant, or I'm putting my butt pad on backwards.

Throughout the skit, DeGeneres — err, "Kardashian" — grabs her obviously fake breasts, rubs her ready-to-pop-any-second bump, struggles with her ginormously-fake nails, and is otherwise freaking hilarious.

"You watch Keeping Up with the Kardashians, right? I'm a big part of the Kardashian family," DeGeneres tells her audience. "But when the show first started, I had a small part. But then I went to go see a doctor in Beverly Hills, and he made it bigger. That was a joke about improving the breast size."

LOL. Watch the comedic genius that is Karla Kardashian for yourself in the video, below.

DeGeneres went on to address the major baby boom in the family. "This season, all of the Kardashians are having babies," she said. "Or as we like to call them, spin-offs." Then, she revealed yet another shocking Kardashian pregnancy, announcing:

So we all know that Kim is expecting, right? And everyone's talking about Khloe and Kylie being pregnant. But I have breaking news — and I'm not supposed to tell anybody, but I don't care because I'm part of the family — Kourtney is also pregnant, as well.

What?!! Is she serious?! Enter: The real Kourtney Kardashian

"Stop making up rumors about me," Kourtney tells Karla. "I"m not pregnant.

To which Kourtney replies, "Karla, stop trying to make up rumors like you know all of our secrets." Karla admits her mistake, saying, "You're right. I'm sorry, I'm sorry ... I confused you with Kendall because Kendall is pregnant. And I know that for a fact. That one is true."

For the next order of business, Karla says she would like to share another crucial tidbit of information. But this time, it's about her own pregnancy.

"For the first time, I'm revealing who the baby daddy is," Degeneres announces. "So I went on Maury, and I have the results right here ... the father is Shaquille O'Neil's cousin, Jaleal O'Neal."

Well, that makes perfect sense. Kardashians do seem to have an affinity for professional basketball players. "Us Kardashians always date famous athletes," DeGeneres says. "Jaleil used to play in the NBA."

"That's right, that's what I did," O'Neal confirms. "The Neighborhood Bowling Association."

DeGeneres first introduced the world to the awesomeness that is Karla Kardashian back in 2015, when she sported a more signature Kardashian look. However, just like her "sisters," Khloe and Kim, it seems as though Karla has traded in her dark tresses for a platinum blonde 'do. Way to "keep up" with the sisters' evolving looks, Ellen!

“I’m the lesser known Kardashian sister, my name is Karla Kardashian with a K, we’re known for our double Ks. These are double Ks, too, by the way,” Karla says, pointing to her breasts, while on Ellen‘s Season 13 Halloween episode. According to People, she went on to explain:

I’m a big part of the family, but for some reason I’m always cut out of the show,” she continued. “I understand because they only have 12 reality shows that are on TV 80 hours a week, but they didn’t have room for me.

Here's what Karla looked like during her debut appearance on the talk show:

To me, this skit is the perfect combination of over-the-top hilarity while still remaining respectful to the Kardashian and Jenner sisters. I absolutely love that DeGeneres also makes fun of the fact that rumors are so easily started about the famous, reality-TV family — and that both Kourtney and Kendall come out and defend themselves. Getting actual members of the family on the skit only confirms that the Kardashians hold no ill-will against DeGeneres' quirky antics. I don't know about you, but I can't wait for a Karla Kardashian three-peat!