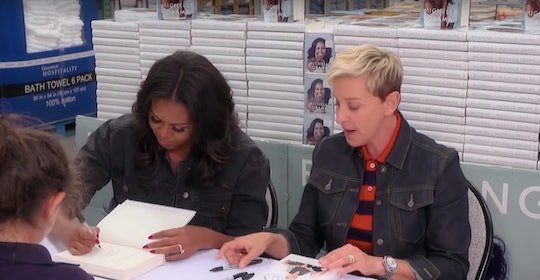 There are a lot of responsibilities one has as a best friend. Chief among them? If your BFF releases a book, you need to travel with her to see it in a store for the first time, and maybe even participate in some antics while others line up to get their copies signed. And that's exactly what happened when Michelle Obama and Ellen DeGeneres went to Costco, and save to say, the entire thing was hilarious.

This isn't the first time that Obama and DeGeneres have caused chaos in a public store. (Remember back in 2016, when they navigated the mean aisles of CVS together?) As she did then, DeGeneres came equipped with her megaphone, capable of communicating to everyone in the vicinity that her dear friend Michelle was there, and that, uh, if you wanted, you could get DeGeneres' book signed, too.

Yes, among the other antics, DeGeneres pulled out a copy of her own biography, and offered to sign it for fans who came to see Obama. When she wasn't busy doing that, she was dancing, bringing wine and cookies, a large box of PreparationH ("for sitting so much, it can be a problem") and bringing an electric piano which she then encouraged Obama to play while she sang.

Yes, the entire thing was wild, and TBH, every second was more amazing than the next.

Though the two certainly like to have fun, it's clear they have a genuine friendship. In fact, after President Barack Obama and his family left the White House, Michelle did her very first interview as a civilian with DeGeneres.

When asked about how life was now, she said: "People are afraid... But then there are people who feel good about the direction of the country, so I mean, that’s what makes this country complicated because it’s made up of so many different people from different backgrounds. I mean, we are this mosh pit of society and sometimes there’s a rub."

The thing I learned in the eight years I was in the White House was that what we do every day in our lives, the good things that we do every day and we know we do it. We show empathy, we care for each other. You know, we do have a lot in common. That’s what it means to lead with hope and not fear. And that’s all we have is hope.

Even more significantly, the date of the aforementioned interview (Feb. 1) was indeed DeGeneres' birthday, and she expressed to Obama that she felt "scared" at the time, and that she wasn't feeling hopeful about where the country was headed.

However, as always, Obama had an incredible response, saying: "The thing we have to remember, and the thing I learned in the eight years that I was in the White House, is that what we do every day in our lives, the good things that we do — we show empathy, we care for each other, we do have a lot in common — that's what it means to lead with hope and not fear."

It's clear that Obama is just as much able to kick back and have a laugh with her friends as she is an inspiring, thoughtful, empowering role model for women everywhere. Most likely, that's the exact juxtaposition that readers will see in her book, and it's also what makes Obama so endearing to many.

She knows how to have a good time, and she knows when to be a boss. Thankfully, she's got some seriously funny friends to keep her laughing all the way.