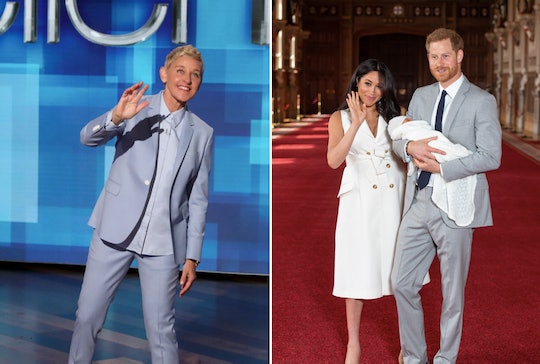 OK, so the meet-up between Beyoncé, Prince Harry, and Meghan Markle was big, but nothing can top this. As it turns out, the one and only Ellen DeGeneres met baby Archie while visiting the Duke and Duchess of Sussex on her summer vacation and shared an incredibly sweet report on the little family.

DeGeneres spilled the beans of her visit with the Sussex family during a promo for her new show, which premieres for its 17th season on Monday. Though she had more to say about the afternoon she spent with the family, "The most important thing is I got to hold little Archie, the baby," she told her studio audience. "I fed Archie, I held Archie… He weighs 15 pounds which, the exchange rate I believe is 17 dollars," DeGeneres joked.

The comedian teased the audience by asking if they wanted to see a photo of the royal baby before revealing that she doesn't have one. However, she did have one very sweet detail to share: "He looks just like Harry, and he had more hair than I did at the time."

DeGeneres' report about who Archie resembles seems to stack up to previous updates on the little guy. For example, a source told Us Weekly in August that Archie has begun to grow reddish colored hair, saying: "He is changing so quickly, but it looks like he’s going to have his dad’s hair color."

During the show, DeGeneres also got bold with her defense of Prince Harry and Markle, who have fallen under recent criticism for taking private jets while also promoting conservation work, according to USA Today. "They’re the cutest couple and so down to Earth and I just hate it, I see them get attacked and it’s so not fair,” she said. "They’re two of the most down-to-Earth, compassionate people. They’re doing so much good for the world."

DeGeneres had previously defended the couple on Twitter when the news first broke. "Imagine being attacked for everything you do, when all you’re trying to do is make the world better," she tweeted on Aug. 19.

The host also revealed during the show that she and her wife, Portia de Rossi, will be partnering with the royal couple on conservation efforts. “Portia and I talked to them about all the conservation they’re doing for wildlife. They’re doing all this work in Botswana for elephants, and I love that. And they like what I’m doing for the gorillas in Rwanda so we’re gonna’ all do something together,” she announced. Guys, this is an environmental dream team.

DeGeneres shared the rest of her vacation with her viewers, saying that she and de Rossi visited Amsterdam, which left her wide-eyed. “We walked through the red-light district and it turns out it is not where they make the traffic lights,” she quipped. “Seriously, I am from New Orleans so I thought that I had seen everything but it turns out I had not. But now I have. Jesus forgive me,” she added.

The Ellen Show returns with a star-packed week. DeGeneres tagged Kris and Kylie Jenner, Melissa McCarthy, tennis player Novak Djokovic, and dancer tWitch in a tweet about the premiere, so those are all faces fans can expect to see soon enough. And who knows, she may share more about her special afternoon with Archie and the royals as throughout this new season.