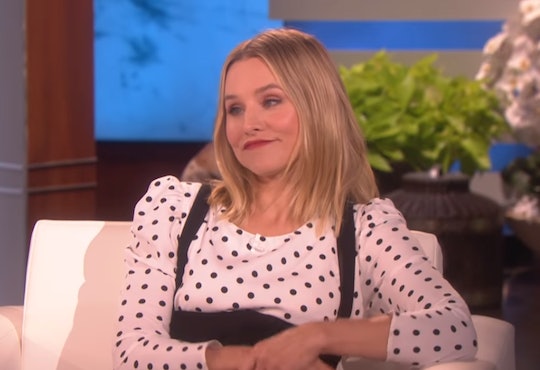 Being sent to the hospital with a camera crew to witness a birth in action sounds... intense. But, of course, when Ellen DeGeneres sent Kristen Bell to a maternity ward to hand out gift baskets it was both wild and genuinely entertaining, because she refused to sacrifice her trademark humor and honesty. Kristen Bell is the mom friend we all deserve, and Ellen DeGeneres (our cool aunt friend) is helping her serve weekly doses of postpartum hilarity in their web series, Momsplaining.

Now in its second season, the series, which posts new episodes online every Friday, "reveals how hilariously hard motherhood can be, offering moms everywhere a fun and lighthearted escape, and a few tips on the perils of parenting." At least, that's how it's described on EllenTube, the digital content repository that supplements DeGeneres' beloved talk show.

Reading that, you may assume that it's just a bunch of corny jokes about hiding out in the pantry eating chocolate, or how yoga pants are sooooo comfy. Mercifully, this is Ellen DeGeneres and Kristen Bell we're talking about, so it's genuinely funny. And since it's not actually on daytime TV, it gets a little more raw than viewers might anticipate.

Bell visited Ellen on Thursday to give viewers a sneak peek of the newest installment of Momsplaining, in which Bell visits Providence Holy Cross Medical Center in Los Angeles and meets Kimberly Patel, a patient who gave birth to twins just a few hours before the camera crews showed up. Fun thought experiment: would you be down with that? Three hours postpartum, I was high as a kite with a catheter still inside me. But, Kristen Bell! It's an extremely tough decision that I'm glad I'll never have to make.

After handing over the obligatory basket of baby care products, she announced that she had one more gift for Patel, and I'm betting it was her favorite. After asking the twin's older siblings to turn away and cover their ears, Bell produced an exam glove she'd fashioned into an ice pack to soothe Patel's overworked... well, as Bell put it, "hoo-ha, honey pot, baby cave, man eater, baby cannon, hand warmer, lady junk..." At this point, she asked Dad to join his sons before rattling off a few more that were too hot for TV. Luckily, the internet exists, so you can hear them in the full video; just make sure you send the kids out of the room first.

It doesn't end there, though. Bell then brings another gift to the nurses' station, saving all the new moms from that recent, horrible obligation. Look, I know nurses are heroes who walk among us and all that, but the last thing someone needs to worry about when they're about to create life is buying presents for someone else. Who started that? But I digress.... Bell's gift basket included some snacks, copies of Frozen on DVD, and I won't spoil the last one, but it's utterly nonsensical and I totally want a framed one in my living room now. Does that pique your interest?

But wait, there's more! After a crash course in delivery basics from the nurses and Scarlett the Labor Training Assistant (an uncanny and very graphic animatronic teaching tool that makes Annie the CPR dummy look positively pleasant) Bell — and Ellen's camera crew — attended two actual human births. Remember how brave we thought Patel was for letting them into her room when she was fully covered? Yeah, never mind. Bell's reaction to seeing a "brand new human" arrive is so touching, you just might tear up... At least until she cracks another joke.

Moral of the story? Momsplaining is the "fun and lighthearted escape" all moms need.