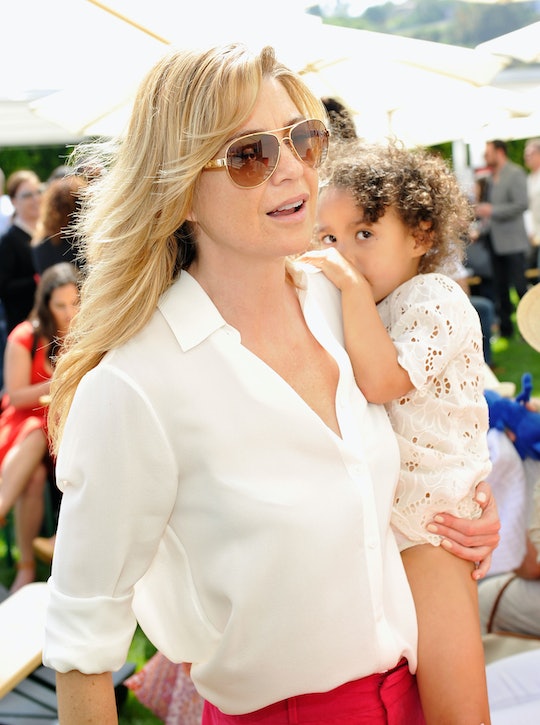 Like most parents, Ellen Pompeo is eager to share certain experiences with her children. At the top of that list is voting. In a recent interview with Bustle, Pompeo revealed she plans to vote with her kids in tow. While none of the actress' three kids are old enough to cast ballots themselves, the Grey's Anatomy star is hoping to turn her own vote into a teachable moment.

While no one under the age of 18 can vote in a U.S. election, children are allowed to accompany their parents into a voting booth in all 50 states and Washington, D.C. That being said, some states like Maryland limit the number of children allowed to two. So, it's a good idea for parents to check their own state's rules before heading out to the polls with three or more kids in tow.

But this November won't be the first time Pompeo's kids will have watched her cast a ballot. In November 2018, Pompeo shared a photograph of herself and one of her children (she shares 11-year-old Stella, 6-year-old Sienna, and 3-year-old son Eli with husband Chris Ivery) on Instagram alongside the caption, "My voting squad." She later shared a sweet video of one of her daughters struggling to correctly pronounce the word vote.

In fact, voting has long been an issue Pompeo has been outspoken about. In 2018, for example, she joined Cher, Jodie Foster, Laverne Cox, Sophia Bush, and many other female celebrities in creating "Because it Matters," a PSA encouraging women to vote in the midterm elections. Two years earlier, Pompeo participated in a campaign ad for then-Democratic nominee Hillary Clinton. And in 2012, Pompeo was all smiles when she was spotted leaving her local polling place with Ivery.

This year, however, it seems we can expect to see at least one of Pompeo's children with her when she shows up to cast her ballot in the 2020 presidential election.