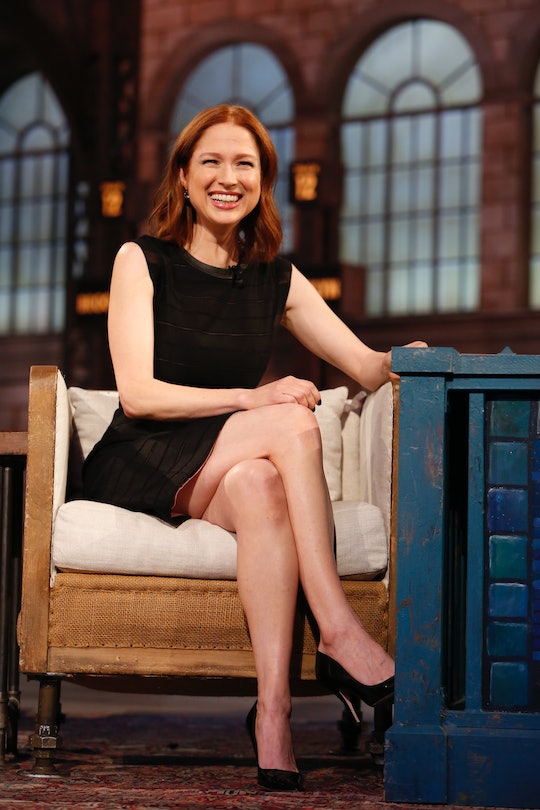 Celebrities, they enter fugue states just like us. Take actor Ellie Kemper, who has woken to an online shopping cart full of random stuff added during the night. "You're completely delirious," she says of those early days with a new baby. "They will say [people] take sleeping pills and do that, but this is not a sleeping pill. It's just sleep deprivation." As someone who once woke up convinced she was cradling her baby, but found said baby fast asleep in a swaddle across the bedroom, allow me to proffer a "same."

Kemper is standing in a studio "kitchen," just two months on from the birth of her second child, as two electric pillar candles flicker behind her (are you anyone if you are not on the set of a pretend kitchen?). She is there with an HP printer and rack of sparkly glitter canisters to promote her "Get Real" partnership with HP on printable activities for families to do over Christmas that get everyone off their screens. It's a smart tactic when you have an older sibling wondering where they fit on the new totem pole. "You just want to always, I think, have something for them to do," says Kemper.

Her 3-year-old seems to have handled the family addition well. "Lately he's been painting a lot," says Kemper, "not professionally but ... watercolor, and painting." He also loves to play on a typewriter. "Just seeing the words come up on the paper is so satisfying for him. It is satisfying. I relate to that."

For the star of The Unbreakable Kimmy Schmidt, taking life one printable stencil at a time is instructive, especially when making your way through the blackout period of a baby's first 12 weeks.

"My friend told me this, and I thought it was so valuable, which is that everything is a phase, and that does harken back to Kimmy Schmidt for me, cause one of her favorite mantras was just to take it 10 seconds at a time," says the laudably upbeat Kemper. "There's such, I think, profound wisdom in that. That nothing lasts forever, that things change, and it might be a difficult moment or a stressful moment or a trying moment, but it will pass."

I want to crack open a canister of pink glitter.

"And so it's hard to do that in the moment, to recognize that in the moment, but I think that's where the work is," she continues. "You realize that you can get through that moment and then you have a minute to breathe before entering the new moment."