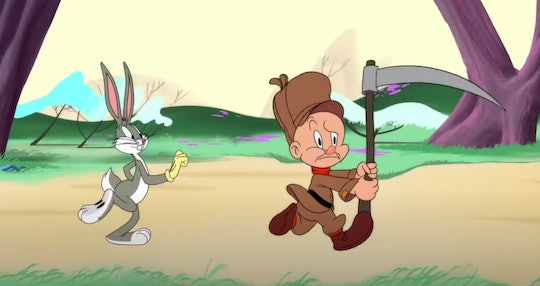 In the new Looney Tunes revival on HBO Max, Elmer Fudd won't carry or use a gun like the character has in the past. Instead, the Warner Bros. cartoon character who loves "hunting wabbits" will be doing so without a rifle.

This new take on the Looney Tunes series — Looney Tunes Cartoons — premiered on HBO Max last month and longtime fans will notice that Elmer Fudd's appearance has gotten an update. Peter Browngardt, the series' executive producer and showrunner, told The New York Times that the revival series has the same classic characters like Bugs Bunny and signature gags, but they're doing away with firearms. "We're not doing guns," Browngardt told the newspaper. "But we can do cartoony violence — TNT, the Acme stuff. All that was kind of grandfathered in."

Browngardt told IndieWire that they had shown some of the old Looney Tunes cartoons to families to see how they were received today, and while the old tropes tested well, the gun humor did not resonate with the test audience, prompting the revival to use "no weaponry but lots of dynamite." These changes are evident in a clip from the new series, where Elmer Fudd uses a scythe and dynamite to taunt Bugs Bunny.

Introduced in 1930s, Looney Tunes has a history of depicting "wacky violence," as A.V. Club put it. Indeed, while many people fondly remember characters like Bugs, Tweety Bird, and the Tasmanian Devil, the cartoon actually featured some pretty violent scenes. The characters are often blown up by dynamite, shot directly in the face, and experience death defying falls.

Even with the removal of guns, Decider reported that you can still expect to see some cartoon violence in the new series, so it's not recommended for the younger crowd. Only a small number of the 12 minute long episodes of Looney Tunes Cartoons have premiered on HBO Max so far, but there will eventually be 80 in total, according to Fast Company.

You can stream the first 10 and future episodes of Looney Tunes Cartoons, in addition to all 19 seasons of the classic Looney Tunes series, and see Elmer Fudd without his signature rifle on HBO Max for $14.99 a month after a free seven day trial.