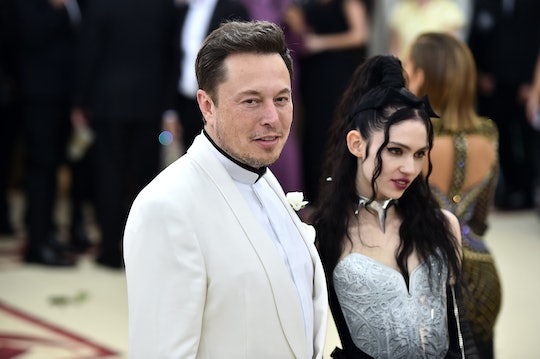 In a somewhat low-key announcement on Twitter, billionaire Elon Musk revealed his girlfriend Grimes gave birth to their first child together on Monday, May 4. The exciting news came after a follower had asked the 48-year-old entrepreneur for an update on their baby and Musk responded by saying they were "a few hours away!"

And, as promised, hours later Musk shared on Twitter that "mom & baby" were "all good." Later on, in a number of follow-up tweets and responses to his followers, the Telsa creator revealed the couple, who've been together since 2018, welcomed a boy, his very unique name, and a few photos of their new bundle of joy. And while everyone can agree their son is adorable, there's still some mystery surrounding his name.

"We need the name we literally need it," one of Musk's followers tweeted at him after he announced the birth of his son. In response, the new dad revealed that he and Grimes, whose real name is Claire Boucher, named him "X Æ A-12 Musk."

So how does one pronounce X Æ A-12 and what does it mean? Although Musk — who has five children from a previous marriage, according to People — has yet to expand further on this question, one Reddit user speculated, as Mashable first reported, that because the "name for the ligature Æ is 'ash'.. so in the name, it may be pronounced that way... and the Lockheed A-12 [an aircraft built for the CIA] was part of the Archangel internal design effort. So maybe they're thinking: X Ash Archangel Musk."

Others on Reddit suggested that the name could be pronounced "Sascha 12" or "Sasha Archangel."

Either way, little X Æ A-12 Musk is adorable. Musk shared a precious photo of him holding his newborn son after a Twitter follower said "a pic of you holding the baby would break the internet ... please share one."

And shortly after sharing that photo, Musk tweeted another pic of his son. This time, with some photoshopped tattoos on his face and fuller eyelashes.

While Grimes has not yet shared an update or birth announcement on social media, the 32-year-old Canadian singer did open up about her pregnancy and struggling to work while expecting back in January on Instagram. "How do y’all cope with working and having a baby??" she captioned a selfie. "I’m sorry I haven’t been promoting my album properly or on social media more. This whole thing has been a bit of an ordeal."

Grimes added that she'd had "some complications early on, a decent second trimester but starting to hurt everywhere at 25 wksz." She went on to say:

I feel like I was woefully ill prepared cuz I dunno if pregnancy is as visible or discussed as it should be. I just didn’t rly understand what I was getting into. It’s been good too, but it makes working a lot harder. Good at writing and having lots of wild ideas tho, but anything physical is hard. Im also way more emo and less capable of bravery in the face of haters online and stuff haha. But my albums out in a sec so I prob need to get back on here. Don’t mind my emo energy, but curious what other ppls experience was like... I didn’t even google it, I was just like sure y not hahaha smh.

No matter how much Googling you do, most parents would likely agree that nothing can totally prepare you for a baby. And hopefully Grimes and Musk will share an update on how things are going with X Æ A-12 soon enough.