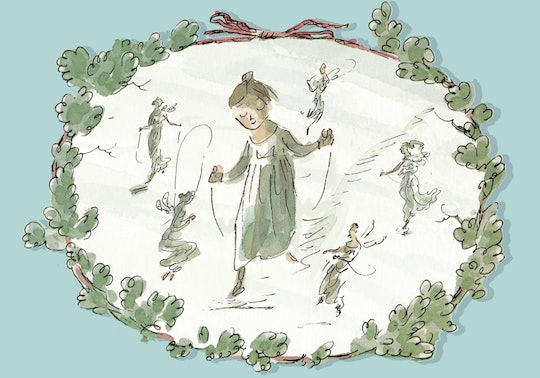 The Book That Taught My Daughter To #Resist

"There are going to be times in life when people want you to do things that you know you shouldn't do, things that are wrong or cruel. But when you know what's right, you just have to hold fast to that. You have to keep resisting what they're saying." I told my daughter months ago.

Ostensibly, we were discussing her friend. He's a boy who is often sweet, but who also occasionally grabs her arm and tries to force her to play games she doesn't want to play. But I was also trying to teach her that she will sometimes need to push back against an unfair world.

I knew my words might be used against me. Awaken a 6-year-old’s political sensibilities and you run the risk that you will create a tiny dissenter who resists the end-of-day cleanup or to resists the directive to sleep in her own bedroom. But I've been more afraid my daughter will grow up in a country that is fast sliding towards authoritarianism and believe she has no power to make a difference. I've been terrified she could become part of the machinery that allows others' rights to be taken. So every day for the last two years, I've consciously tried to empower her.

She raised her eyebrows. "I don't want to do that!" she repeated, unconvinced.

It was then that I remembered Eleanor Farjeon's enchanting 1937 story of resistance, Elsie Piddock Skips In Her Sleep. I discovered Farjeon as a child breathing in the aroma of coffee, looking up at the gloriously tall shelves packed with books at the now defunct Printers' Inc. bookstore and cafe in Palo Alto. Once I fell in love with Farjeon's luminous and slightly odd stories, I hunted for her books everywhere and found her short story collection Martin Pippin in the Daisy Field.

In the collection, six little girls beg a cheeky minstrel (Martin Pippin) to tell them stories. One of the tales he tells is Elsie Piddock Skips in Her Sleep. It's a story I've now read to my daughter many times. I bought her the 2017 standalone edition of the story, illustrated in ink and watercolor by Charlotte Voake, whose whimsical and delicate line work echoes that of an original illustrator of a number of Farjeon's books, Edward Ardizzone. While I read to my daughter, she traces these illustrations with her finger and I can feel her delight.

Elsie Piddock is a poor little girl in the village of Glynde under Caburn. She skips rope so beautifully the fairies invite her to learn all the different types of skips with their special skipping master, Andy Spandy. He gifts her a magical jump rope that has candy for handles — sugardy candy on one and almond rock for the other. She returns to her ordinary life, and to the village's amazement, she can out-skip anyone to the tune of "Andy Spandy sugardy-candy, French almond rock, bread and butter for your supper's all your mother's got."

She becomes a legend, but as she ages, she disappears from the villagers' view. Industry takes over. A cruel, greedy lord wants to build a factory on Mount Caburn where the children skip, against the villagers' wishes. Elsie, now a 109-year-old woman, tells one of the devastated little girls to make a deal with the lord to allow a skipping contest. He cannot lay a brick for the factory until everyone who has ever skipped on Mount Caburn has had a chance to skip, and no brick should be laid until after the last skipper skips her last skip.

Skipping is the one thing Elsie can do better than anyone, and so the act holds tremendous power.

Of course, the contemptuous lord agrees to this request. A skipping contest seems to him like such a trivial thing, a nonpolitical thing. All the little girls of the village take their turn, and then Elsie, tiny and seemingly frail, steps up to take her turn. She starts skipping with the magic skipping rope, and the lord soon realizes his error. A deal's a deal, however, and she skips so long and hard and well, using all the tricks that the fairies showed her, that the factory is never built.

In spite of the antiquated language, my daughter immediately understands the beauty of this story. What could be more minor than skipping rope, an action that truly seems to have no purpose, an action that appears to be apolitical? But skipping is the one thing Elsie can do better than anyone, and so the act holds tremendous power. The chant, too, suggests something that's inconsequential, but it, too, has the surprising power of an earworm. Elsie can follow her talents and play by the rules, but still perform a lawful act of resistance, and win.

I've read this book to my daughter many times now, but I still choke up when reading the last few pages. I have to stop and wait for the feeling to pass, or I won't arrive at the end of the story without bawling. I'm afraid of what the future holds for my daughter, for all our daughters. I'm scared I've brought her into a dangerous world that is decaying faster than ever, a world that won't value her or her rights. I desperately want her to remember this story always. I want her to deeply understand that even one person can hold out against injustice, and that a whole community of people that refuse to capitulate can make significant strides. It takes a minute to push past my anguish and terror and keep reading in a calm voice.

Many parents want easy obedience from their children. But these days, I breathe easier every time my daughter says no, every time she puts up her tiny acts of resistance against what feels unjust. If all of us do this, if all our children do this, maybe we stand a chance.