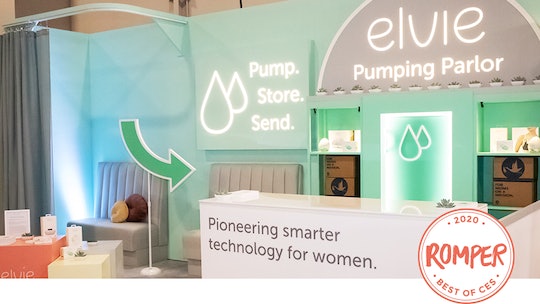 While the annual Consumer Electronics Show (CES) in Las Vegas has traditionally been an overwhelmingly male-dominated event, two companies are working together to ensure new mothers have the services they need. This year, Elvie and Milk Stork have joined forces at CES to support breastfeeding moms with a pumping lounge, milk concierge, and more.

Considering the huge convention runs for nearly a full week, the logistics nursing moms have to consider can be a serious hurdle. Elvie — a U.K.-based company specializing in the innovation of discreet, wearable breast pumps — teamed up with the first-ever breast milk shipping company, Milk Stork, to make sure moms at CES have access to everything they need during the extended time away from their babies. Mamava lactation suites have also been at the convention since 2017, so after years of women having to pump in public restrooms at CES, plenty of proper accommodations are finally here.

“At CES, 70% of participants are men," Tania Boler, Elvie founder and CEO, tells Romper. "Even so, you’ve got a really large number of women — you’ve got more than 50,000 women there. It’s just shocking; there’s nothing there to support new moms. So we wanted to highlight what a lack of support there was for new moms and change that.”

On the Elvie side of things, an exhibit floor pumping area will include a relaxing nursing lounge where moms can comfortably pump. There will also be a temperature-controlled, medical-grade refrigerator for safe milk storage.

As for the daunting task of getting all of that pumped milk back to their babies? Nursing moms can use a complimentary Milk Stork Pump & Tote to carry their refrigerated milk home.

A four-day trip meant I had to pump two gallons before I left to cover being gone — on top of the gallons that they were already consuming — carry two gallons of breast milk through TSA with my wheelie bag, my breast pump storage bag, and my computer bag.

To top it all off, Elvie is also providing a Milk Concierge, so women can simply drop off their pumped milk and arrange for it to be stored at the Elvie booth while they're at the convention.

“I think conventions and conferences are particularly challenging for pumping moms. You’re just walking into completely un-navigated territory; you don’t really know what you’re walking into," Kate Torgersen, founder and CEO of Milk Stork, tells Romper. "So being able to be up front and solving those pain-points for pumping moms who are trying to navigate this enormous show is really exciting.”

The whole reason Milk Stork came to be, Torgersen explains, was because she had a four-day business trip and had to pump for her twins. "At the time, I was producing a gallon of milk every two days," she tells Romper. "So a four-day trip meant I had to pump two gallons before I left to cover being gone — on top of the gallons that they were already consuming — carry two gallons of breast milk through TSA with my wheelie bag, my breast pump storage bag, and my computer bag."

On top of the physical burden breastfeeding moms face on work trips, Torgersen says there's also an emotional burden — a burden the companies hope their initiatives can help alleviate. "We’re trying to lighten those loads for moms," she says, "so that it’s easier for her stay ambitious and to stay connected with things that she loves — and in this case, tech."

Editor's note: This article has been updated.