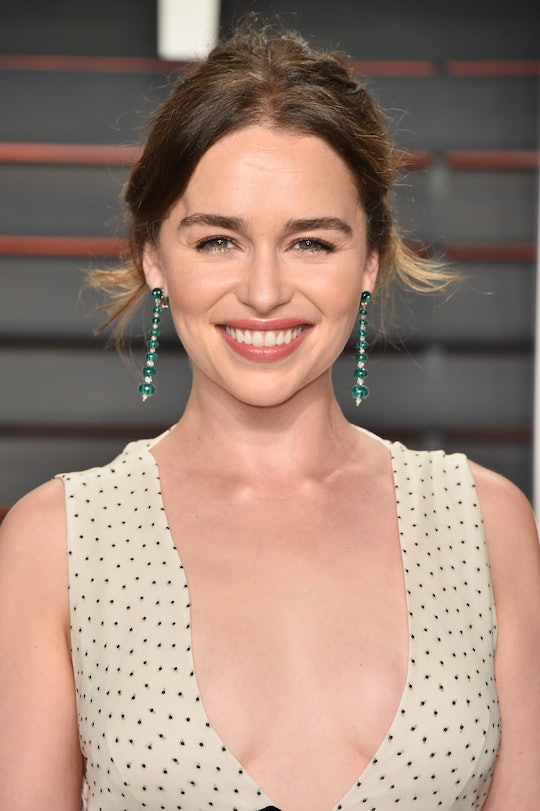 Although women are portrayed in a myriad of situations — not all of them pleasant — on her television show, Emilia Clarke says that Game of Thrones isn't sexist in any way. The popular HBO show has been under fire ever since a rape scene last season that many deemed totally unnecessary. But Clarke, who plays Khaleesi, thinks that that classification is totally unfair. In an interview with Entertainment Weekly this week, Clarke said that any accusation that the show is sexist "pains her" precisely because women are portrayed in so many different roles.

That's kind of a rough breakdown of female roles throughout the real world, here in 2016 if you think about it. The mother of dragons added that that diversity "showed the range that happens to women, and ultimately shows women are not only equal, but have a lot of strength." She has a point. Female characters on Game of Thrones who have zero rights and are objectified as sexual tools aren't exactly glorified. Take Khaleesi, for example. Clarke teased her plot line in the interview saying that although Khaleesi is back to being a slave, next season, she'll also be fighting to show the Dothraki that she's "more than her appearances."

Most of the criticisms concerning the show's treatment of women stems from a character's wedding night rape scene last season. Many viewers believed it was gratuitous to Sansa Stark's plot line and a dangerous way to entertain viewers. But not everyone thought the rape scene was out of place. Sophie Turner, who portrays Sansa on the show, told Entertainment Weekly at the time that she "loved" the scene because it was "so messed up." The scene, she said, fit with the characters' story arc and that it was also "daunting" for her to play as an actor.

Those comments didn't do much to appease angry fans who expressed their disapproval in a firestorm of reactions on social media. Show-runner Dan Weiss and David Benioff said that after criticisms of the rape from viewers and even Senator Claire McCaskill that they were making adjustments to future episodes.

The rape of Sansa, for many, was another in a long line of seemingly unnecessary plot points that tend to portray women as vulnerable in order to make them interesting, according to Melissa Leon over at The Daily Beast. It's true that the show often depicts women as objects and often tends to tell the story of that objectification from the male characters' gaze, instead of the woman's. In Sansa's rape scene for example, the focus is more on an onlooker's anguish than her own throughout the scene.

Despite previous thoughts on how Game of Thrones deals with sexual violence towards women, Emilia Clarke's statements about the variety of different female roles certainly seems to ring true. But if season six relies on making the women victims for the sake of keeping viewers interested, the producers and actors might have to rethink their motives and how to explain them to Twitter.