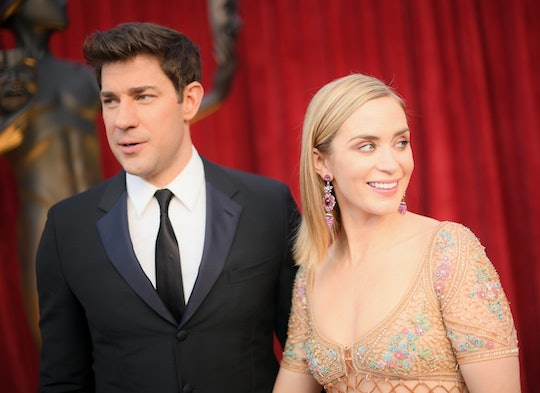 No matter what the gossip magazines say, most people agree that stars are not "just like us," because wealth and fame tend to make things much easier (and beauty certainly doesn't hurt, either). But although they're able to afford the best schools, doctors, and child care, there are some aspects of raising a child that are universal. Emily Blunt and John Krasinski's parenting fears are probably the same as yours or mine, despite their relative privilege, because all the fortune and fame in the world can't protect kids 100 percent of the time.

The couple recently spoke to People about raising their two daughters, 4-year-old Hazel and 21-month-old Violet, and Blunt said she wants the same things for her kids that all parents do: "My children's happiness, their safety, and their well-being is the most paramount thing in my life," said the star of A Quiet Place, in theaters this week. "And if [I am] unable to give them any of those things, then who am I? What's my identity?" Her comments really speak to the helplessness parents feel when they consider the overwhelming responsibility of bringing a new life into a world that's often beyond their control. Blunt continued, "My greatest hope is that they are truly happy, and that they're interested in life, in anything. Interested and interesting, and truly happy."

Krasinski expanded on Blunt's statements, telling People that for him, "the scariest thing about being a father" is the inability to be there for his kids at all times:

Even when [we] drop our 4-year-old daughter off at school, you don’t know what she's gonna do that day. You don’t know if other kids are gonna be nice to her or if she [will get] in trouble for something. You just want to protect them at all costs.

Protecting one's children is the central theme of A Quiet Place, which Krasinski costarred in alongside his wife, in addition to co-writing and directing. The film depicts a family that must live in complete silence while hiding from creatures that hunt by sound. In an interview with Entertainment Weekly, Krasinski explained the couple's decision to pick up the script by co-writers Bryan Woods and Scott Beck:

People are like, "Why did you do a horror movie?" I didn't. I chose to do a family movie that happens to be scary. I thought this story could be the greatest metaphor for parenthood — I mean, it'd be a terribly cheesy tagline: "What would you really do for your kids?"

It's similar to the premise of Get Out, although admittedly not as subversive. While the "monsters" in that film represented racial inequity, and the way that modern-day racism takes the insidious form of microagressions like cultural appropriation, the monsters of A Quiet Place represent the world at large; the innumerable real or perceived threats that children face every day, and parents' powerlessness to stop them all. As author Elizabeth Stone wrote, choosing to have a child "is to decide forever to have your heart go walking around outside your body." It's the ultimate vulnerability.

Parents with similar worries would do well to remember that prayer made famous by Alcoholics Anonymous, which asks for "the serenity to accept the things I cannot change, courage to change the things I can, and wisdom to know the difference." All children will probably get picked on at some point in their lives. As parents, we can't prevent every setback. What we can do is teach them to overcome adversity, and grow from it. And while we're at it, teach them never do the same to another mother or father's child. That's the best we can do.