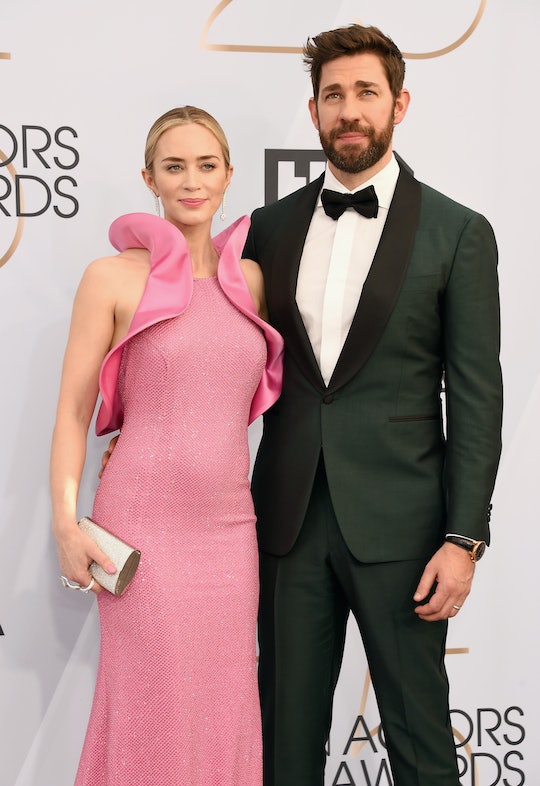 If you're a self-identified theatre, TV, or film nerd, you probably tuned into either Rent: Live or the Screen Actors Guild Awards on Sunday night. But if you opted for Rent: Live, you'll probably want to hear about Emily Blunt’s SAG Award Speech, which made John Krasinski tear up in the sweetest way. (Raise your hand if they're also one of your fave Hollywood couples.)

Sunday night, Blunt was nominated for two acting awards, for her roles in Mary Poppins Returns and A Quiet Place, the latter of which she won. When her name was called, she and Krasinski both looked shocked and excited, and they immediately hugged each other before she made her way to the stage.

“Oh my goodness me. Guys. That truly has completely blown my slicked hair back,” she joked upon taking the stage. “Thank you so, so, so much. I am so moved and completely lost for words and unprepared." But when the main person you want to thank is your husband, preparing a speech isn't necessary.

"I am going to share this completely with my husband, John Krasinski, because the entire experience of doing this with you has completely pierced my heart directly," she said. The camera cut to a teary-eyed Krasinski with the proudest look in the world on his face. He was clapping, and even blew a kiss towards his wife.

"You are a stunning filmmaker. I am so lucky to be with you and to have done this film with you,” Blunt said. “Thank you for giving me the part. You would have been in major trouble if you hadn’t, so you didn't really have an option, but thank you,” she said, showing off her wry British humor. Krasinski wrote, directed, and co-starred in A Quiet Place, according to People, so it was only natural that he cast his talented real-life wife to play his on-screen wife.

Blunt then gave a shout-out to her and Krasinski's two children. "Thank you to the two little poems in our life, our daughters Hazel and Violet, who will have to be at least 45 before they can see this film, but they'll be proud of you nonetheless," she said, before thanking her professional team and the SAG voters.

Blunt and Krasinski, who have been together since 2008, according to Heavy, have made it clear on many occasions that they are the perfect couple. In 2011, Krasinski opened up about meeting Blunt while appearing on The Ellen DeGeneres Show. As per People, he said:

It was one of those things where I wasn’t really looking for a relationship and I was thinking I’m going to take my time in L.A. ... Then I met her and I was so nervous. I was like, "Oh god, I think I’m going to fall in love with her." As I shook her hand I went, "I like you."

In 2012, Blunt told Modern Luxury that talking about her marriage to Krasinski is impossible because it's so damn good. She said:

This is what I find difficult about talking about my marriage: It’s hard to sum up something that’s so vital and means everything to you in a sound bite. Do you know what I mean? All I can say is that it’s an effing blast. It’s just great, and I’m so happy.

These two are such big supporters of each other, and it will be so exciting to continue to witness both their romantic and professional partnerships grow.