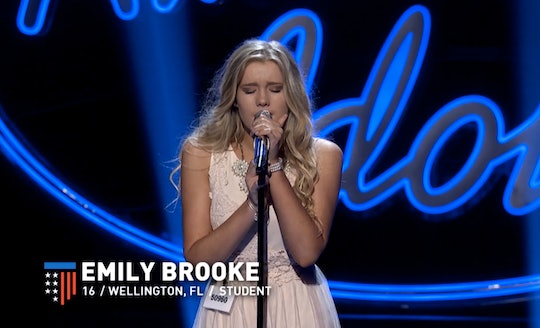 Even if you aren't the biggest fan of Rascall Flatts, contestant Emily Brooke singing "What Hurts the Most" on American Idol Wednesday night should still have given you some major feels. Emily Brooke is 16 years old but she has the pipes of someone way more mature than that. In fact, during the show's infamous Hollywood Week, her soulful take on the contemporary country classic left everyone wondering whether she'd be moving on to the top of the competition in the coming weeks.

Brooke was eliminated from American Idol in season 14, just before the top 24 announcement last year. Now she's back and pretty much killing it, although she knows she has to come on strong.

She told the judges on Wednesday that she was feeling super emotional. She said it was mainly just nerves about knowing that "every performance has to be better than the last." So, so very true.

"I'm feeling nervous, my voice hasn't been full this week," she said. But she must have heard wrong, because as soon as she started on Wednesday night, the judges were floored. They were so impressed that Jennifer Lopez turned to Harry Connick Jr. while she was singing and commented that Brooke "wasn't ready for it last year", indicating that things had definitely changed.

But she is totally ready now. Connick was all smiles when he replied to JLo that "things happen for a reason," meaning that this might be her season. Her voice got a little shaky midway the performance which caused Keith Urban to grimace a little bit. But what does he know? (Alright, he knows a lot.) But Brooke's way of getting down and dirty with the song had the other judges on her side. Also, the original Rascal Flatt's tune is all about that angsty teenage love, so it was a great choice for Brooke.

Tonight's performance was a far cry from her audition last year. If fans thought she "blew the judges away" last year, this year it's a whole different ballgame. The Florida teen also has that country swagger going for her. Although she just showed up with her pipes this time, she can also strum the guitar like a badass, so she has a lot to work with for the final season.

Even though Urban winced a little tonight, back in 2015 he told her that she had a "lot of raw talent" to work with, and her friends, family, and fans totally agree. On her Facebook page, she has lots of support. One friend reminded her to stay strong, writing, "Just remember the judges keep talking about how much they love you,... Know you can't say, but dang I hope we get to vote for and support you, but either way ya got my support!"

Although she started off on Wednesday admitting that she felt like she was going to start crying, it looks like Brooke will be going far this season. Just keep doing you, girl.