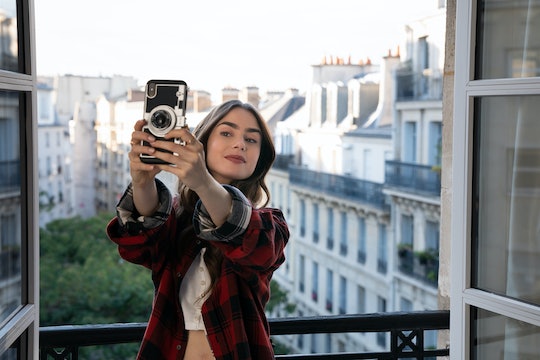 'Emily In Paris' Did Pregnant Women a Huge Disservice

Emily in Paris, which premiered on Netflix earlier this month, hit at just the right moment in our pandemic despair cycle. As many people across the country remain hunkered down, bracing themselves for the brutality of winter and the election, the frothy, easily-digestible series offered up pure escapism — a chance to travel when they can’t actually go anywhere. Following young marketing whiz Emily Cooper through a ten-episode romp around the City of Light, viewers are invited to suspend disbelief and indulge along with Emily as she traipses along cobblestone streets in stilettos, conjurors brand campaigns out of thin air, and becomes the object-of-attraction for every good-looking man she encounters.

But while some inhaled the series as Emily inhales chocolate croissants, others are hate-watching, taking Emily to task for her blithe entitlement and her refusal to do any introspection despite her fish-out-of-water blunders. Reviews have pointed out Emily’s constant trivializing of French culture, the hubris of her fake it till you make it attitude toward learning the language of the country where she is living and working, and the script’s over-reliance on cliches of Parisian life (Breakfast wine! Incessant smoking!). Plus, nobody living in the French capital wears this many bright colors.

But perhaps the least credible thing in the whole plot is the tired device that gets Emily to Paris in the first place. Back in Chicago, our bright young go-getter was being groomed by her talented mentor Madeline, played by Kate Walsh. Madeline has long dreamed of moving to Paris (and, it should be noted, actually speaks French) but mon dieu, wouldn’t you know it, she falls pregnant just when she’s about to jet off.

Goodness knows I would watch Addison Montgomery-Shepherd play just about anything, but it was a strain to see Walsh fall victim to the shopworn trope of discovering she’s pregnant because she’s nauseated by a spritz of new perfume and has to throw up in by her chic office garbage pail.

As if the token “discovering surprise pregnancy by vomit” isn’t bad enough, Emily cracks wise to her boyfriend about a pregnancy at Madeline’s (advanced) age and not knowing who the father is. Worst of all, this surprise pregnancy is the singular reason Madeline must give up the job. Yes, the job that justifies her master's in French and is the fulfillment of a lifelong dream.

Emily in Paris wants us to believe that a girl posting generic selfies, portrait-mode flower shots, and her Parisian #RoomWithAView can turn her own hum-drum personal Instagram into a bona fide influencer account, but that there are no French doctors capable of handling a woman’s pregnancy.

By choosing to go with Emily rather than her more competent, experienced, and yes, pregnant, boss, the takeaway is clear: Young people get adventures, mothers get heartburn.

While it might be easy to write this off as a simple plot device, pregnant people giving up and being forced out of employment opportunities has a very real history. In 2019 alone, the Equal Employment Opportunity Commission (EEOC) received 2,753 complaints of pregnancy discrimination. Many more likely go unreported, as pregnancy discrimination is difficult, and often costly, to prove. Working people who become pregnant are still given advice on how to conceal their “delicate” condition — order a glass of wine at a recruitment dinner to temper any suspicions, how to hide a pregnancy until the bump is unavoidable — rather than blanket protections that the law should grant.

Fans might argue that Madeline’s decision was her own personal choice. Technically, she was not pushed out, fired, or forced to step aside for a younger employee, fresh-faced and untethered by family life. But look at what the COVID-19 crisis is doing to the idea of mothers’ “choice” when it comes to work-life balance. In a country where working mothers are already at a breaking point by the overwhelming, often prohibitive costs of day care, the gender pay gap, and an unequal breakdown of household chores, COVID-19 has somehow made an already impossible situation so much worse, and an entire generation of mothers is teetering on the brink of being shoved, forcefully and without apology, out of the workforce. COVID-19 has exposed just how spit-and-glue many of the systems that working mothers depend on are.

Emily in Paris doesn’t bother much with Madeline’s backstory; instead, her character is immediately reduced to a floating face in a video call, another caricature-like depiction of a pregnant woman complaining about “nausea, sore boobs, and enough gas to launch a parade float.”

I know Emily in Paris is not meant to be taken seriously, a bit of fluff for a weary world. But I’m also frustrated that mothers don’t get a chance at fluff. How quickly would I have binged 10 episodes of fish-out-of-water escapism about how pregnancy and motherhood is treated in France versus the United States (there’s a whole book to base it on)! How fun it would have been to see a group of French mothers aghast when Madeline describes the paltry offering that is our Family and Medical Leave Act. How entertaining it would have been to see Madeline discovering “crèche,” France’s state-run, subsidized, sliding-scale priced day care system, lightyears ahead of America’s. Children’s manners and kids’ menus and playtime demands could have been delicious kindling for snaps about the difference in childrearing between the cultures.

Did we need another Carrie Bradshaw-knockoff traipsing around Paris looking for love (real love!)? I don’t know, but I sure would have loved watching a Miranda Hobbs-style heroine, toting a toddler through the Paris streets right about now, a break from the dispiriting reality of working mothers hiding in bathrooms, desperately trying to get work done before troubleshooting another zoom classroom.

By choosing to go with Emily rather than her more competent, experienced, and yes, pregnant, boss, the takeaway, while probably unintentional, is still clear: Young people get adventures; mothers get heartburn.