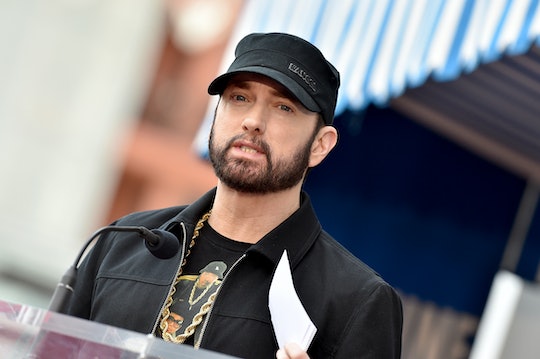 Eminem's Surprise Performance At The Oscars Was Incredible/Confusing

There were snubs, shocks, and successes on Sunday night during the Academy Awards, but the best surprise of the night was Eminem's performance at the 2020 Oscars, which quite literally had everyone in the audience "losing themselves." The rapper's performance of his Academy Award winning song "Lose Yourself" was so unexpected, the biggest names in Hollywood didn't know how to handle themselves.

The rapper unexpectedly walked out on stage during the show to perform the entirety of the song, which was released 18 years ago. Although Eminem came out of nowhere to perform the rap song from the movie 8 Mile, there is some history there: Eminem won an Academy Award for Best Original Song for "Lose Yourself" in 2003, but the rapper wasn't there to accept it — he told Behind The Boards that he stayed at home because he thought he had "no chance in winning." Almost two decades later, Eminem finally got to be onstage at the Oscars and get the standing ovation he deserved all those years ago.

Some People Were Shocked

Director Martin Scorsese looked absolutely baffled, while singer Idina Menzel could not believe her eyes. Perhaps she was afraid of being upstaged by Eminem since she just also performed during the night.

They looked like they were ready to throw up "mom's spaghetti."

Few Recognized How Awesome The Performance Was

But game recognizes game. Leonardo DiCaprio seemed to really appreciate the significance of Eminem performing it on stage, while others were dancing to it from the comfort of their seat.

But Everyone Was Appreciative In The End

But no matter how people might have felt during the performance, everyone was able to agree that it was awesome. Their collective standing ovation at the end of the song proved that. It was well earned.