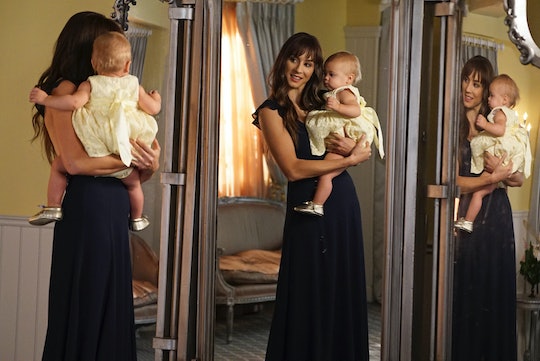 When "Till Death Do Us Part" caught up with all of the Liars a year after the events of "Choose or Lose," it found nearly all of the girls living in domestic bliss. Emily and Alison were still happily ensconced in the DiLaurentis house and working at Rosewood High School while they cared for their twin daughters, Lily and Grace. Finding out they had not one child but two was definitely a minor shock, but it actually made a lot of sense.

The odds of multiple births with in vitro fertilization are high but twins are also very thematically important to the world of Pretty Little Liars. Dopplegangers have always played a part in the series, particularly with Ali, and twins come up again and again. Not only were identical sisters Jessica DiLaurentis and Mary Drake a major part of the final season, but the creepy twin stories on Halloween were a recurring element of the show in the past. Ali and Emily having twins fits right in.

The circumstances of Emily and Alison getting together were questionable, but the girls appeared to have turned their lemons into lemonade by the time of the finale. After years of hinting and teasing at Emily and Alison getting together for real, the show decided to go about it in a truly bizarre way that fulfilled a long-held fan theory. As soon as Emily's donated eggs were snatched by A.D., viewers guessed that A.D. would end up impregnating Alison with them and giving the girls an unexpected pregnancy to contend with. And that was exactly what happened.

Though that was an invasive and uncomfortable way for Emily and Alison to find their way back to each other, the girls seemed to find real happiness with each other. The fact that they were still going strong after a year together was a good sign that their relationship had settled, even with all the stresses of raising two newborns. Not to mention all the other drama that comes part and parcel with a Rosewood address.

Despite the roundabout way of giving Emily and Alison their happy ending, fans who had been rooting for them for years still seemed pleased that their favorite ship had made a home together, twins and all.