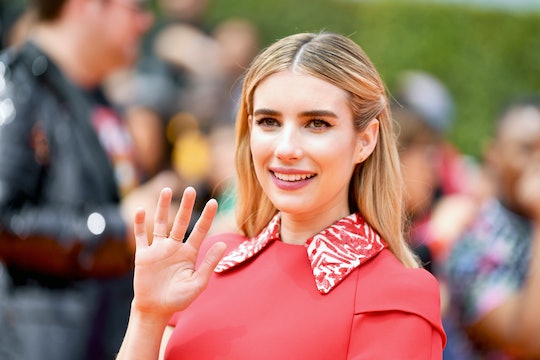 Emma Roberts Is Reportedly Pregnant With Her First Child

Sounds like congratulations are in order for Emma Roberts, who's reportedly pregnant with her first child. Us Weekly reported on Thursday that the 29-year-old Scream Queens actress is expecting a little bundle of joy with her boyfriend Garrett Hedlund. Romper has reached out to a representative for Roberts for comment on the report and is awaiting a reply.

Roberts and Hedlund — who began dating last year, according to E! News — have not publicly commented on the reports. So not much about her reported pregnancy is known, of course. But it's not all that surprising that the actress hasn't posted an announcement or anything of the sort. Roberts is a pretty private person when it comes to relationships, especially after splitting from her fiancé Evan Peters in 2019 after seven years of being together, according to People. So, it's not likely that fans will be seeing pregnancy updates on social media.

Roberts has, however, been active on Instagram over the past few weeks, posting photos of her eating fried chicken in a bathing suit and lounging around in pajamas. What you won't find on her Instagram are photos of Hedlund, which might be because Roberts told Cosmopolitan last year she wants to keep the relationships in her life private. "I never want to talk about relationships I'm in or that are ending or have ended," she told the magazine. "It's hard enough to be with someone by yourself, let alone with an audience. Growing up is hard."

The couple's first child might have big shoes to fill in when they grow up. Roberts comes from an acting family — her dad Eric and aunt Julia Roberts are both in the business. Acting is practically a part of their family legacy. No pressure, or anything.