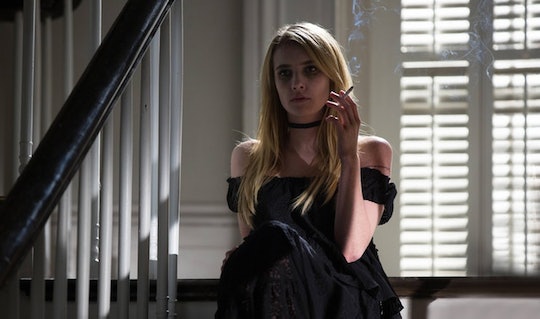 Emma Roberts Is Heading Back To 'American Horror Story'

Bet you thought you'd seen the last of Emma Roberts on American Horror Story, but I'm here to tell you: you're wrong! After starring in AHS: Coven as Madison Montgomery (and of course, in the iconic "surprise, b*tch" gif) and Freak Show as Maggie, Roberts is back once more to grace viewers with her presence in Cult. Roberts hasn't exactly played the character that fans root for, but they certainly enjoy watching her. So who does she play this time around? Emma Roberts' return to AHS: Cult comes with all the things we love most about her various AHS characters, which means she's playing yet another mean girl.

Roberts is no stranger to Ryan Murphy's work. In addition to Coven and Freak Show, Roberts starred in his show Scream Queens for two seasons before it was canceled. In August, Murphy shared a photo of Roberts on set sporting darker hair than her usual blonde, wearing a yellow trench coat and holding a knife. "Look who showed up on the set of Cult looking glamorous and ready for action," Murphy captioned the photo. Madison Montgomery wasn't hesitant to kill those who wronged her in Coven, and Maggie was a con artist in Freak Show, so Roberts hasn't played the hero in these universes. Who will she be in Cult?

Roberts is playing a newscaster named Serina Belinda. In the promo for Tuesday's episode, a clown is seen creeping behind her — so the odds that she is, herself, a clown seems unlikely. Unfortunately, Serina will not have a huge role in the Cult universe; Murphy revealed in a Q&A that she will only appear in one episode. The 26-year-old actress returned to AHS as a "favor" to Murphy. "She carved it out in her movie schedule," Murphy said.

Murphy explained that Serina — like Roberts' other characters in the series — isn't a great person. "She plays a Michigan newscaster named Serina Belinda who is promoted above Adina Porter's character [Beverly Hope] simply because she's much more superficial and willing to do what it takes to survive," he explained. "So, she is here for one episode." Apparently, Roberts actually hurt herself on set: she broke her nose when she hit a sliding door, so her shooting date needed to be moved. The actors playing clowns needed to be instructed to be cautious of her nose; this could be foreshadowing to what happens to Serina in her one appearance.

One episode, plus a clown gathering to be watchful of Roberts' nose? Oh yeah, I think Serina may have a run-in with those killer clowns. If I had to theorize (which, this is AHS, so of course I do), I'd say that Serina is on Ally and Ivy's block reporting on the murders. The clowns then come for her and she's killed shortly after her introduction.

This fate isn't for certain yet — especially because of Serina's apparent feud with fellow newscaster Beverly Hope, played by another AHS alum, Adina Porter. Perhaps Beverly becomes enraged that Serina was promoted over her, and murders her herself. Framing it on the killer clowns would make a perfect alibi. According to IMDB, though, Porter isn't in many episodes this season. This could be because they haven't aired yet, or maybe because Beverly has the same fate as Serina? Regardless, the only fact viewers know at this point is that Emma Roberts is in only one episode. This is AHS, after all, so viewers may assume that her character does not survive. Fortunately, the audience won't have to wait too long to find out what happens to Serina: Roberts' appearance is on Tuesday night's AHS episode. Hopefully this is just one of many projects she and Murphy work on together.