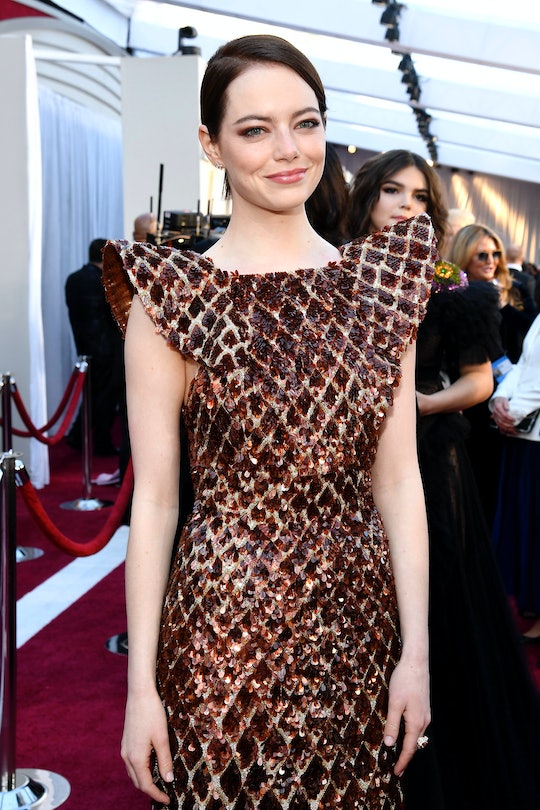 By now, it's clear that actress Emma Stone knows how to wow us on red carpet. So, of course, her stunning ensemble at this year's Academy Awards did not disappoint. In fact, Emma Stone's red carpet look at the 2019 Oscars should honestly take home an award on its own.

Stone took to the 91st Academy Awards red carpet on Sunday night to show off her winning look for the evening. Stone looked absolutely stunning in her bronze sequin dress and accessories, as she walked up and down the red carpet. But, really, did anyone expect anything less?

It's very apparent that Stone came dressed to win, which makes sense since she was nominated in the category for Best Supporting Actress this year for her role as Abigail Masham in the film, The Favourite. While her category was stacked with some serious competition (Regina King had been the current favorite to win in the category for her role in If Beale Street Could Talk, according to The New York Times), Stone should definitely receive some honors for her red carpet look at tonight's Academy Awards because she owned it.

But Stone's red carpet transformation was a little unlike the major transformation she had to undergo to play Abigail in The Favourite. Stone, who's American, had to use a British accent throughout the film and make it fit in naturally with her British cast mates, according to IndieWire. This was a challenge, especially since she was the only person born in the United States among her fellow cast in the film, according to Business Insider. But, she was able to fit in perfectly. "She was brilliant," her co-star, Olivia Colman, told IndieWire.

And whether or not Stone won the Academy Award for her role, she told the Independent she feels lucky to have been in The Favourite at all. Stone said, "I love this film so much that I feel lucky to be a part of it, that is what I focus on and that is what I focused on before. I feel lucky as an actor to get to be a part of things that I would like to go see and so I would definitely go see this movie."

Although this wasn't Stone's first Academy Award nomination, her reaction to being nominated this year was so sweet. "Working on The Favourite alongside my brilliant friends Olivia Colman, Rachel Weisz, and the whole cast was nothing short of incredible," Stone said in a statement, according to MTV News. "I was grateful every day and am honored by this nomination."

In addition to being grateful for her co-stars, Stone is also grateful for her fellow nominees. First time Academy Award nominee (and actress up for Best Supporting Actress), Marina de Tavira shared that Stone sent her a beautiful floral arrangement and note on the morning of the Academy Awards wishing her luck before her big night. Isn't that so sweet?

Whether she's expressing her gratitude for her coworkers or dressed up for the red carpet, Emma Stone is always serving up class at its finest.