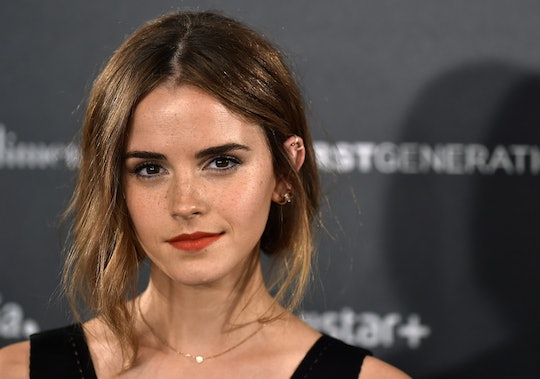 It's not easy being a woman who openly calls herself a "feminist." Especially for a woman as well known as actor Emma Watson, who recently announced she's taking a year off from her wildly lucrative and successful career in movies to learn more about, and push harder for, equal rights for women around the world. Watson caught more than her fair share of flack for her outspoken stance on equal pay in Hollywood and the organization she founded to bring awareness to women's rights, HeForShe. She, like Gloria Steinem and other high-profile, outspoken feminists, has been called a "feminazi," but Emma Watson wants people to know that's not about to stop her from speaking out.

In an interview with People, Watson said name calling isn't going to stop her from fighting for women's rights:

We are not supposed to talk about money, because people will think you're 'difficult' or a 'diva', ...call me whatever you want, it's not going to stop me from trying to do the right thing and more sure that the right thing happens. Because it just doesn't affect me.

The word "feminazi" itself was coined and put out into popular culture in the late 1980s by conservative talk radio host Rush Limbaugh, and, to this day, he still uses the term from time to time to try and shame women out of pursuing stuff like equal pay, equal rights, and control over their own bodies. The term caught on because it was a shorthand way to label and dismiss feminists and their agenda as radical and wildly out of step with the rest of America. And the sly use of a version of "Nazi" slapped onto the end of feminist really captured the unease both men and women felt when what they saw as the "natural order" of things was upended. People who don't support the feminist movement want women to just accept that they are nurturers who should love to take care of their families and bake, and that men are aggressive, competitive, bread winners who bring home the bacon. It's just how it is. Don't overthink it and move on, you bunch of troublemaking feminists.

Except that's just not how things are in the real world, and "feminazis" like Watson and myself know better.

Feminazis know 40 percent of American households with children rely on a woman as the primary breadwinner. Equal pay would mean an automatic raise for those families and a big boost to our economy. Feminazis know that in order for the US to compete in the 21st century, it need its girls to pursue careers in STEM fields. Feminazis like us trust women, rather than the government, to make decisions about their reproductive health.

But, in order to accomplish reforms that lead to equal pay, equal educational opportunities, and control over their bodies, men who have called the shots on this stuff have to give up some of their power. And no one, man or woman, feels very good about loosening their grip on control. So they, who "feminazis" like me call the "patriarchy," try and shame us out of the fight by trying to make us feel and look like some extremist harpies who hate men, which of course is ridiculous.

I'm so encouraged by this wave of prominent feminists in popular culture, from Watson to Taylor Swift to Lena Dunham and others who so proudly claim their feminist selves and refuse to be shamed out of their pursuits for women's equality. Because each and every time they brush the criticisms off their shoulders and roll their eyes at terms like "feminazi," it makes it just a little bit harder for old men (and some women) like Limbaugh to paint feminists as a group of out of touch outliers. Because the opposite is true. Feminazis are daughters and wives and sisters and they're just about everywhere you look. Heck, even the girl everyone watched grow up on those Harry Potter movies is a "feminazi" now. And that's a beautiful thing for every woman.

Happy International Women's Day you beautiful bunch of feminazis. And thank you, Watson, for your courage.