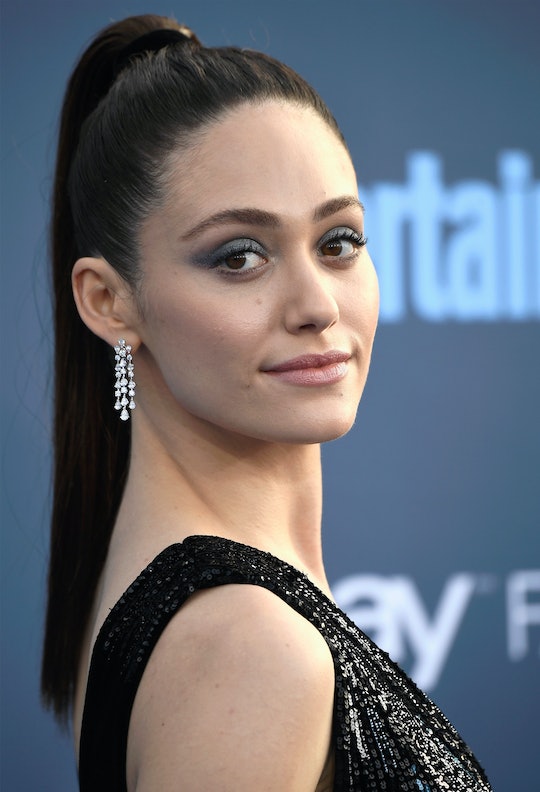 Emmy Rossum Demanded Equal Pay On 'Shameless,' & It's So Important

It's an unfortunate reality that pay inequality (salary disparities between genders and races) is still such a prevalent issue in nearly every industry. In Hollywood, there has recently been a spotlight on the often significant pay gap between men and women on the same show or in the same film. Actresses from House of Cards' Robin Wright to Suicide Squad's Viola Davis have spoken out about demanding equal pay. Jennifer Lawrence even penned an op-ed about the pay gap for Lenny Letter. Most recently, Emmy Rossum demanded equal pay on Shameless, and thankfully, her story has a happy ending.

Last week, The Hollywood Reporter exclusively reported that Rossum was in contract negotiations for the long-running, critically-acclaimed series' eighth season. The dispute was over Rossum's salary for appearing on Shameless, in which she plays Fiona Gallagher, the show's female lead and arguably its most central role (particularly in recent seasons). The actress had also made her directorial debut on the series, directing an episode of Shameless' seventh season.

Multiple sources confirmed that the negotiation hold-up was over the fact that Rossum had for years received "much less" per-episode than her co-star and on-screen father, William H. Macy. In fact, in current contract negotiations, Rossum had gone beyond a demand for parity and instead allegedly held the position that she should be paid more than Macy for Season 8, given the significant gap in their pay for the past seven seasons.

Variety reported that Rossum had been offered parity, but was holding out for more to "make up for" the earlier seasons of drastically unequal pay. Seven years is a long time to put up with making significantly less than a co-worker – especially if you work as hard on a show as Rossum does on Shameless. Apparently, Macy had gotten a raise for Season 8 that sources told THR "puts his salary in the upper echelon of cable dramas." For his part, Macy was all for Rossum getting what she wanted, according to what he told TMZ:

“They wrote the Equal Rights Amendment in 1927. It didn’t get passed by both houses of Congress until 1972. It still hasn’t been approved by all the states. Therefore, it didn't make it as an amendment to the Constitution. It’s about fucking time, don’t you think?” Macy added, "She works as hard as I do. She deserves everything."

Thankfully, it appears that Rossum's contract with Showtime for the show's new season has closed, the dispute apparently having been settled. The Phantom of the Opera actress confirmed the good news and (apparently) also confirmed the show's still-not-officially-ordered eighth season via Twitter yesterday. "Playing Fiona Gallagher has been one of the great privileges of my life. I'm so happy to continue w my SHAMELESS family! Back to work in May!" Rossum tweeted on Wednesday.

It's not yet clear whether Rossum won her bid for a bigger paycheck than Macy or if she settled for parity. Either way, all the attention this contract dispute has garnered is incredibly important. Hopefully, this transparency in the pay negotiating process will go towards lessening pay disparity between genders and races to begin with.

Shameless will air its Season 7 finale on December 18.