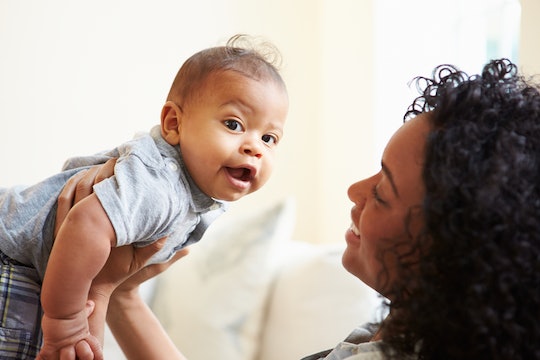 Breastfeeding has a lot of benefits for both mother and child. There's a lot of reasons why some people may choose not to breastfeed their kid, and that's valid. However, researchers have noticed there are issues preventing moms from breastfeeding that need to be addressed. Now, a new study has found that emphasizing maternal care might lessen racial gaps in breastfeeding. This is incredibly important and help highlights how, even in breastfeeding, race can still be a factor.

More Like This
Um, "Rusty Pipe Syndrome" Is A Thing, & Every Breastfeeding Mom Should Know About It
5 Signs Your Breast Milk Has Gone Bad
Are You Breastfeeding & Also *Starving* At Night?
These Pregnancy Symptoms Can Be Easy To Miss When You're Still Nursing

The American Academy of Pediatrics recommends using breastfeeding as the only source of nutrition for about 6 months, but moms can keep breastfeeding beyond then for as long as they or their baby wants. Breastfeeding introduces babies to antibodies that can strengthen their immune system and can help reduce the risk of viruses and infections, as noted by Parents.

But, breastfeeding can pose some challenges for women of color and their babies. Although breastfeeding has become more popular over the years, there are still racial and ethnic gaps, with Black women breastfeeding at far lower rates than any other racial group, as shown by data from the Centers for Disease Prevention and Control.

It may be easy to blame individual moms for not breastfeeding, but UNC Health Talk noted that systemic barriers, such as lack of paid leave, provider bias, and other cultural obstacles all play a role. Now, in the U.S. South, researchers have found one possible solution to address the breastfeeding gap.

A paper published in Pediatrics on Jan. 18 examined several birthing hospitals in the Greater New Orleans area and Mississippi more generally who were included in a program aimed at boosting breastfeeding rates. Between 2014 and 2017, 33 hospitals opted into the Communities and Hospitals Advancing Maternity Practices (CHAMPS) program from Boston Medical Center's Center for Health Equity, Education and Research, as reported by EurekAlert!.

The program specifically focused on altering hospital policies, practices, and processes that were believed to be causing lower breastfeeding rates. According to EurekAlert!, the paper linked the development and implementation of new practices with increases in breastfeeding rates and better evidence-based care — especially for Black women.

Breastfeeding rates at the hospitals included in the study that participated in the CHAMPS program increased from 66 percent to 75 percent, as reported by EurekAlert!, and among Black women, from 43 percent to 63 percent. Nola.com noted the gap between white and Black breastfeeding rates decreased by 9.6 percent over three years.

U.S. breastfeeding rates differ by race. This is the first study that links better compliance with the WHO's Ten Steps to Successful Breastfeeding to lower racial inequities across a large number of hospitals.

The World Health Organization and UNICEF launched the Baby-Friendly Hospital Initiative to help hospitals and the like implement the Ten Steps to Successful Breastfeeding. Those 10 steps are divided into two categories, according to WHO's website: critical management procedures and key clinical practices.

Examples of some of the steps include, according to WHO, coordinating discharge so that both parents and infants have access to the support they might need, and having a written infant feeding policy that's regularly explained to both staff and parents.

Some women may still choose not to breastfeed and there are some who cannot. That's OK! But, this is about working to make sure new moms aren't exposed to structural barriers that take the choice away from them. It is really important work that could impact a lot of moms and their babies.