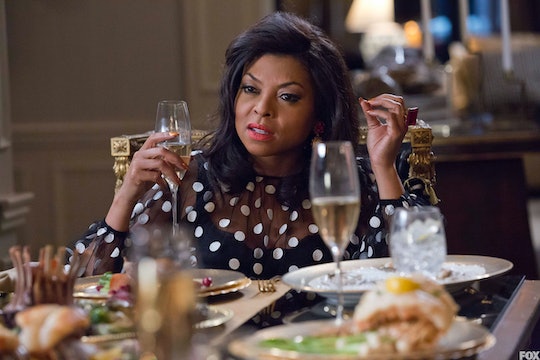 'Empire' Nominated For A Golden Globe, & Cookie Would Be Proud

This is news that would make Cookie proud: Earlier this morning, December 10, Empire was nominated for a 2016 Golden Globe for Best TV Series — Drama. That wasn't the only nomination the show earned. The show's powerful leading lady, Taraji P. Henson was nominated for Best Performance By An Actress In A Television Series — Drama as well. Henson is once again up against Viola Davis, and the twosome shared a beautiful moment last year after Davis one — Henson was the first to congratulate the star, and it was an awesome show of support. This year, Henson is a contender and here's hoping that the musical gods are on her side.

The musical, familial, and coming-of-age drama follows Lucious Lyon, drug dealer turned Empire Entertainment CEO, as he determines which of his sons will take over the company following his ALS diagnosis. Since its premiere in January 2015, Empire has seen earth-shattering success. Refinery29 called it "The Most Important TV Show in Years" in a March article, and fans everywhere have flocked to the drama-filled series, its catchy songs, and, of course, Cookie Lyons. Besides strong ratings, the show's first two seasons brought acclaim for both the writing and the performances (Taraji P. Henson kills it as Cookie).

So far, the show's had a win and a loss this during this year's award-season cycle. Deadline reports that although Empire didn't earn any SAG nominations, Empire did get a Grammy nod for Best Compilation Soundtrack for Visual Media, up against contenders like Fifty Shades of Grey, Glen Campbell: I'll Be Me, Pitch Perfect 2, and Selma. It'll definitely be a tough category to win, but after the Golden Globes announcement, things may swing in their favor.

To recap, here are the two categories that the show was nominated in. Cookie Lyons fans, rejoice, because there's a chance this could be Cookie's year (though, who are we kidding? Every year is Cookie's year.).

Taraji P. Henson, Best Performance By An Actress In A Television Series — Drama

Following the Globes announcement, the Empire fandom spoke out: