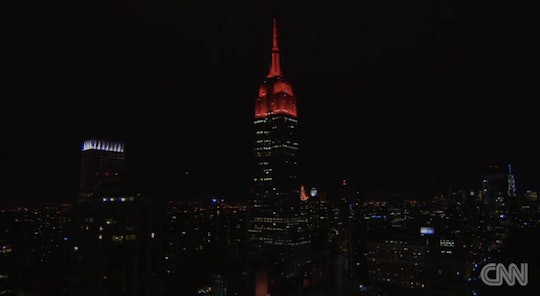 On Tuesday, Donald Trump pulled off a decisive win in his home state of New York. In the Republican primary, the businessman/self-proclaimed wall-lover beat Texas Sen. Ted Cruz and Ohio Gov. John Kasich by a margin of around 50 percentage points, according to early reports. Immediately following the call, the Empire State Building turned red, signaling Trump's win, and the Twitter world exploded.

Over the course of Trump's presidential run, his antics have alternately entertained and terrified many in the social media world. The Empire State Building turning red was no different, launching lots of fantastic Twitter jokes about how the building looked like it was embarrassed, along with a corresponding flurry of confusion and dismay. There was also lots of speculation about what would happen when the winner of the Democratic primary was announced.

Perhaps it's not surprising that the building changed colors for Trump's victory. After all, he used to own it. He acquired the landmark in 1994 and, according to the Trump Organization's website, "endeavored to make the building even grander than before" until he sold it in 2002 for $57.5 billion. Apparently, in the years since the sale, he set his sights on an even greater acquisition — the entire country. It's a goal which, after Tuesday's victory, may just be within reach of his tiny fingers.

New York's primary was an important one for Trump, who had been losing momentum in recent weeks as Cruz picked up states like Wisconsin and Colorado. Trump needed to show that he could rack up the votes in a state littered with towers that bear his name, and he did, even if two of his kids weren't able to cast their votes for him because they missed the voter registration deadline. Tonight's victory may not be enough for Trump to go to the Republican National Convention with the number of necessary delegates to avoid a contested convention, but it gets him closer, meaning the citizens of America will have many more opportunities to practice their best Trump jokes on social media.

The Empire State Building's colors didn't stay red for long. Once news outlets declared Hillary Clinton the winner of the Democratic primary, the building's color shifted to blue in honor of her. And somehow, Twitter didn't react to Clinton's blue with the same talk of an impending apocalypse. We'll all have to wait and see what color the building turns on the night of the general election in November. But in a topsy-turvy world, at least there's one thing we count on — no matter who gets elected, Twitter is sure to go bananas.