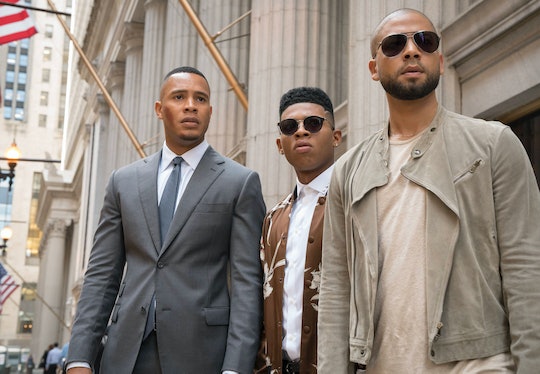 This season of Empire is not holding back when it comes to social commentary. In the season premiere, Jamal performed the song "Need Freedom," which takes on the #BlackLivesMatter movement and police targeting African-Americans. At the end of Wednesday's episode, police approached Andre to ask him about a robbery – and it's clear they suspected him. We were left with an agonizing cliffhanger for next week, but one thing is clear: Empire is tackling police brutality, and it's pretty intense to watch.

In the final scene of tonight's episode, police approach Andre to question him about a robbery. He soon realizes that – for no reason other than his race – that he is a suspect. After making a quip, the officers throw him to the ground and point a gun at him, telling him to "stop resisting arrest." And...that's where the episode ends. We're left with fictionalized suspense but, unfortunately, this scenario is all too real for some.

The rest of the episode, too, spoke on issues affecting the African-American community. Taye Diggs guest starred as Angelo Dubois, founder of the kids' charity WOKE (We Organize for Knowledge and Empowerment), which focuses on helping black youth. He spoke to Jamal about his personal issues – like the fact that he is undergoing trauma from getting shot – but that there are political and social reasons why that happened as well.

According to TV Guide, Jussie Smollett – who plays Jamal – spoke in a press conference about this direction of the show and Diggs' character. "What we're able to do in an entertaining way is really show a conversation -- two very valid views on that conversation that if joined together could be more powerful," he said. "Angelo has good things to say. There has to be common ground between what they're saying. These are valid points. One does not outweigh the other."

Empire is not afraid to dive into difficult issues that other shows wouldn't dare touch. We know from the cliffhanger that it's not going to stop at this episode, and it will probably continue throughout the season. It's clear that the producers want to send a message, and from the first two episodes of season three, it's proven to be effective. We'll have to keep watching to see what other important issues Empire takes on.