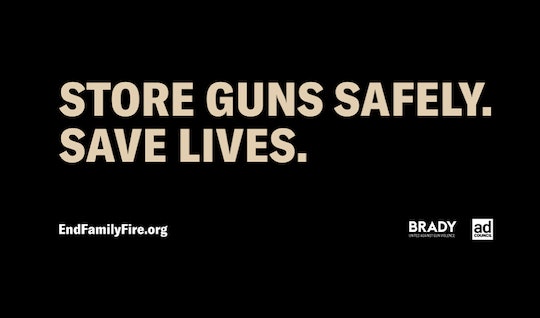 With gun sales surging during the pandemic and many struggling with feelings of loneliness, isolation, or despair due to COVID-19, the nonprofit organization Brady: United Against Gun Violence and Ad Council are highlighting how access to firearms in the home can increase the risk of suicide. Through a series of public service announcements, the End Family Fire campaign encourages safe firearm storage by reminding gun owners that keeping their firearms unloaded, locked away, and separate from all ammunition can be the difference between life and death.

"Guns are by far the deadliest method of suicide," Brady President Kris Brown tells Romper. "And so by storing any guns in our home securely, we can give our loved ones a second chance at life."

In 2017, the latest year for which data is available, suicides vastly outnumbered homicides in the United States, according to the Centers for Disease Control and Prevention (CDC), and more than half were firearm suicides. But, according to a 2014 study conducted by the University of California, San Francisco, death by firearm suicide may be preventable as researchers found that access to a gun in the home increased the risk of suicide.

"The risk of suicide with a child in the home is that the child is accessing the parents' gun," Brown, a mother of two, tells Romper. "So safely securing that gun and ensuring that it is unloaded, that it is locked, and that the ammunition is separate is the difference between life and death."

For Brady member Denise Marks, whose story is featured in one of the End Family Fire PSAs, the pain of losing a child to suicide is unfortunately something she knows all too well. "I remember calling 911 and screaming," Marks tells Romper of finding her 20-year-old daughter Emily in the backyard in 2012. "But I knew she was gone."

While Marks' husband kept his guns locked away, he stored his ammunition with the firearms and used a key lock instead of a combination lock, a key Emily was unfortunately able to find. But Marks' husband isn't alone in having assumed that because his guns and ammunition were locked they were safe.

A 2006 study published in JAMA Pediatrics found that many parents who own firearms believe their child has no idea where their gun is stored or how to access it. But, according to that study, 73% of children aged 10 and younger knew the storage location of their parents' firearm and 79% reported having handled the gun.

While Brady's End Family Fire campaign has been around for two years now, this year's focus on preventing firearm suicides through safe gun storage is especially timely. Gun sales have surged during the ongoing COVID-19 crisis; according to the Brookings Institute, nearly 3 million more firearms have been sold in the United States since the pandemic first began in March than are traditionally sold during these months.

But Brady is hoping its campaign will help educate gun owners on the importance of safe gun storage and ultimately, save a life. As for Marks, she hopes that in sharing her story via Brady's End Family Fire campaign she might help other parents and gun owners prevent a firearm suicide in their own home.

"We put medicine away, we hide it, we will lock cabinets so little kids can’t get into it and yet, in so many cases, guns are laying around, they're loaded and children get in and get ahold of them," Marks says. "We're not trying to take people's guns away. That's not our message at all. Our message is just to be cautious and to store them safely."