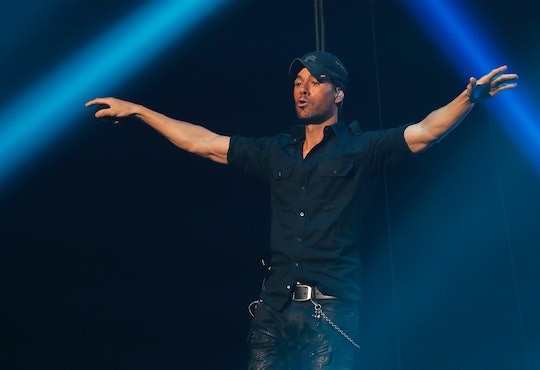 Enrique Iglesias' son has some big shoes to fill, but he's already proving he's got some serious vocal chops. The singer occasionally posts photos and videos of his son, but this most recent video is the most adorable one yet. Iglesias' video of his son Nicholas copying him, as reported by People, is the cutest thing you'll see all day. Maybe he'll follow in his famous father's footsteps and take on the music industry when he's old enough.

Iglesias posted a video of his son, in which Nicholas can be seen wandering around their home making gurgling noises wearing a blue shirt and shorts, according to the outlet. In the clip, Iglesias starts to say, "Ahhh," in various pitches, prompting his son to copy. He can also be heard making other baby noises, which the toddler appears to respond to. Nicholas belts out a perfect copy of his father's singing, which Iglesias then shared for the world to enjoy. He captioned the cute clip of his baby boy with, "Serious Talk." The 43-year-old singer added several silly face emojis, capturing the overall mood of the video. The response from fans was overwhelmingly positive. The comments section is flooded with hearts and praise from followers.

Iglesias shares twins Nicholas and Lucy with longtime partner Anna Kournikova, as per People. He sometimes shares photos and videos of the children, which fans seem to enjoy. Recently he shared a video of his kids pushing him on a motorized car. He joked in the caption that it's a "Typical Saturday." The kid's faces can't be seen, but they appear to be enjoying themselves. Fans flocked to the comments section with laughing emojis, hearts and more. Prior to that, he shared a video of Nicholas dancing outside, writing "#Sundaymood."

The award-winning musician speaks often about fatherhood. In an interview with ITV, he called it "one of the best feelings in the world," as per E! Online. He added that a lot has changed since he welcomed his twins. Iglesias told ITV he's much more careful now and "more responsible" because he's a father.

"I drive slower. I think about stupid things a few more times before doing them," he told the network, adding that he wants to "be a cool, easy-going dad."

He also gushed about his new role as a father during a concert, according to iHeartRadio. While performing in Budapest shortly after the twins were born, he told the crowd he loved his children "so much" already. Iglesias did not share anymore information about the children at the time, however.

"I became a father 12 weeks ago and I can absolutely tell you two things: I love my babies! I love them so much," he said.

Iglesias is not only candid about his life as a father. In October, he opened up to The Sun about sex after having twins. He admitted to the outlet that he and Kournikova's sex life "has not diminished" since they became parents. In fact, he told The Sun they're probably having more sex now than they ever have. More power to them.

"It's probably more sex now than ever. The sex has not diminished," he shared with the magazine.

He also admitted that being parents has evolved their relationship. The singer told The Sun he's enjoyed watching Kournikova become a mother, calling the transformation "incredible." He added that she's "great" at it, and that it came naturally after the twins were born. Iglesias admitted that they go through "ups and downs," but added that their relationship is "perfect in a way."

Iglesias and Kournikova met in 2001 on the set of his "Escape" video, according to People. There have been many rumors that they tied the knot, but Iglesias maintains that it's not the case. He told The Sun in his October interview that their relationship is not unlike a marriage, and he's open to taking that step, but perhaps down the road.

Iglesias and Kournikova welcomed their twins in December 2017, according to TMZ. The children were born in Miami, and were the first kids for both parents.

Hopefully Iglesias will share more of his children in the future. In the meantime, fans are enjoying the glimpses they get into his adorable family life, especially the sweet videos.