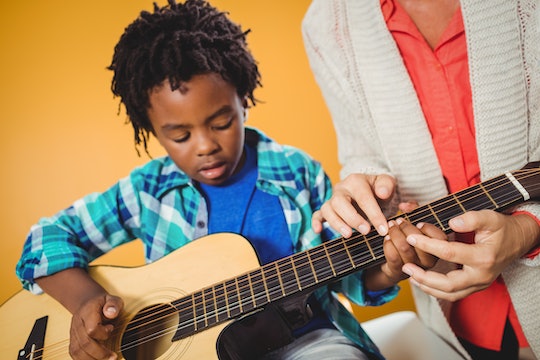 When I was young, no matter how tight time or money got my parents always insisted that we make room for music lessons. At the time, I balked. But as an adult, I see the wisdom of their ways, and fully appreciate what they accomplished by bearing through my hours of terrible practicing because, according to new research, enrolling children in music lessons is great for their development in several ways. In fact, it seems to be one of the most affordable and time efficient ways to teach important life skills.

The study — called “Examining Parents' Perceptions of the Self-Regulatory Behaviors, Self-Determinative Screen-Time Use, and Engagement with Screen-Based Personal Learning Environments for Adolescents Participating in Private Music Study” — was commissioned by the Guitar Center and undertaken by researchers at the University of Georgia and University of Alabama. In it, 2,323 parents of children between the ages of 7 to 17 were surveyed. The children were currently participating in private music lessons through a music store, or with a private instructor.

"For all of the constructs, we found that parents of children who participated in music lessons for over one year perceived statistically significant higher levels of all of the behaviors compared to parents whose children participated in lessons for less than a year," lead researchers Brian Wesolowski, Ph.D and Stefanie Wind, Ph.D said in a statement, according to a press release. "This difference was substantial for all of the constructs that we measured and persisted across socioeconomic, race/ethnicity, and gender groups."

The researchers were looking for parents' perceptions of their children, and found that there were five key areas in which music students excelled.

But the benefits of music lessons aren’t limited to these. Music lessons also develop discipline and patience as well as cultivate academic skills, according to Parents. Math and science principles are highly related to music as students take in principles like meter and time, and learn harmonics. As Lynn Kleiner, founder of Music Rhapsody, explained to Parents, "It seems that music wires a child’s brain to help him better understand other areas of math."

Even before a child is ready for formal music lessons, bringing music into the home benefits their development, according to the Novak Djokovic Foundation. For very young children, the skills involved in remembering, reading, and singing nursery rhymes foster literacy and language development. Children have been shown to speak more clearly and develop a larger vocabulary with early exposure to music.

Science has shown that’s because when kids play music, their brains develop “neurophysiological distinction,” or the ability to discern sounds they would otherwise overlook, according to TIME. One caveat: in order to reap those benefits, kids have to participate in the music lesson, not just sit back and let the music flow by.

So this new research is good news for parents who have been looking for a rationale to spend the money to get their enrolled in music lesson. It seems to be an investment well worth the time and resources.