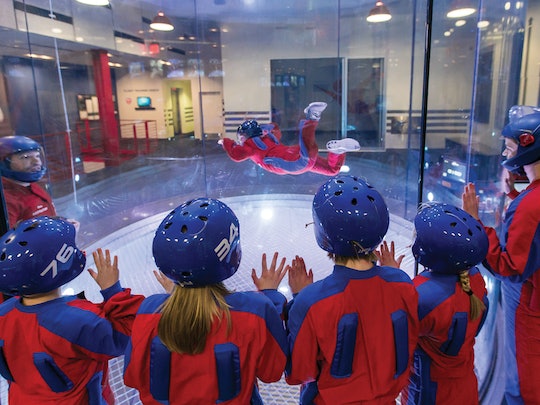 Here's What Indoor Skydiving Is Really Like, In Those Tunnels Across The Nation

The next time you head to the local mall to inspect an array of nearly identical men's shirts at Banana Republic, try on a bunch of preposterous lipstick shades at Sephora, and then enjoy an authentic "chicken pesto flatbread" at Brio Tuscan Grille — a good day out, you might say — consider following the CRVs and Forresters into the parking lot of the rocket-ship-looking building on the edge of the retail park. Inside that great structure emblazoned with "iFLY," kids, parents, and teens are indoor skydiving. Where once parents might have emptied their wallets into a Dave & Busters token machine, or paid extra for blacklight bowling, they are now taking turns soaring about in the air with their kids just 300 feet from a Container Store. It is a surreal offering. The surprise gift of the holidays. And it is a rush.

Indoor skydiving is a funny word for the experience. Wind tunnels have cropped up across the globe — there are now 37 iFLY locations, including one in Australia, where a relative of mine works as a guide — and while they were initially a cheaper way for hardcore skydivers to log minutes and hone their aerobatic tricks than hitching ride after ride into the sky, "bodyflight" has become a sport in its own right, and one that kids as young as 3 can perform.

On the one hand, it is a jolt of adrenaline — leaning into the tunnel doorway and finding yourself take flight on the blast of wind is a bit like finding yourself inside a giant hairdryer. You bob and spin above a mesh floor that looks not unlike the diffuser on your old Con-Air. Once you figure out the basics, you can begin to go up and down, left and right, and eventually to flip and spin headfirst at the ground, your hair flailing out the back of your helmet. In their demos, the instructors fly around in the great glass tube like Power Rangers.

At the same time, though, it is not jumping out of a plane. No one in my group screamed "Vaya con Dios!" before launching into the tunnel. No one had to worry about being afraid of heights. The group before ours had several little kids who puffed back and forth in the tunnel like smiling clouds, their instructor standing beside them, gently steadying them as a carnie might escort a child on a pony ride; where adults need the wind dialed up to around 185 miles per hour to find themselves aloft, kids need just a breeze to bob about. It is the wild stuff of NASA trainings and entirely safe. You might be experiencing terminal velocity, but you are doing it while people pad about with their jumpsuits peeled down to the waist eating Doritos and friends give you the thumbs up from outside the glass.

A big piece of the magic, if not the idea of having powerful wind propellors at your local suburban park and an open invitation to zoom about, is the instructors. If you have ever watched a street performer dance about with a levitating stick, you understand the subtle skill the instructors bring to flier after flier: like Zeus conducting a thunderstorm, they direct you with a few simple hand gestures, boost you up with a tiny adjustment, wave their hands beneath you to create a subtle air pocket that brings you down, whoosh you back to center, and can take you spinning up toward the sky — all you need to do is keep a straight body, more or less.

I had a chance to go indoor skydiving a short time after having my second child, and declined. In my mind, the diastasis recti would blow open like a barn door as soon as the wind hit my belly. Instead, I watched my husband learn to spin and move forward and backward as my toddler took off running down the hall laughing, and I heaved after her with a baby on my chest. Motherhood: are you familiar with it?

This time, I wanted a go.

I was much more nervy than I imagined I would be as I slipped into my iFLY suit, popped on my helmet, and went through the briefing. I sat in the last position on the bench outside the tunnel, my heart thumping as I watched person after person enter the space and waggle their arms about as they found their flying position. They would exit to high fives, and we would all slide our bums along the bench until we were at the front. Finally, it was my turn.

To enter, you raise your arms above your head and look at your hands, then lean in the doorway onto the air — an absurd kind of trust fall. Then, you are flying, a miracle you acclimatize to in seconds. Tiny little adjustments — fingers open, hands closer to your face, widen your legs a little — put you in a place you can comfortably remain there, soaring nowhere at all at extreme speeds. The most important signal, the instructor, told us, was "relax." The hand shape for it was the shaka-shaka.

I took a lot of swims while pregnant; immersing my gigantic body in water took the weight off me. You figure that when the baby is born, that weight will disappear, but somehow it multiplies. One day, you find yourself staggering across a road with two toddlers clinging to each side of your torso as a shopping bag spins around on your wrist and someone sings "BA-BY SHARK DOO DOO DO DO DO DOO DOO," thousands upon thousands of Newtons pulling on your tired body. Even when you are banished to enjoy some kind of me-time, sentenced to pampering and self-care, the bathroom tile receives transmissions of the screaming taking place in the living room; the soothing face mask manages to sting (what happens when your face is too red even for aloe?).

No one ever considers matching the fury and ecstasy of motherhood with, say, wind blasting at you at a cool 200 mph. No one tells you "hey maybe you should take a morning off, leap out of a plane or something." There in the wind tunnel, with a young lad giving me the thumbs up, I got ready to plummet to the ground and was instead met with a raging force that propped me on top of the weather. I could have had rocket packs strapped to my abs. I felt amazing. I went up and down and around and then out the door, where I was met by gravity again. As Jeff Bridges sang, sometimes falling feels like goddamn flying. (He never said goddamn, but he also didn't push out two kids.)

We left the tunnel on a high and, walking back to the car, I for a second had an urge to throw my arms in the air and take off. WHOOSH, I said to my husband, miming my supernatural abilities.

And he got it, of course, too.