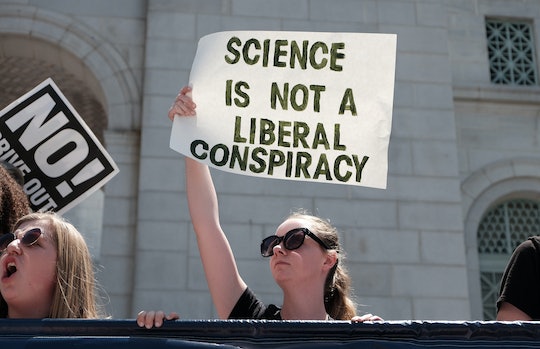 On Friday, the U.S. Environmental Protection Agency issued a press release announcing major updates to its website. Unsurprisingly, climate change is on the chopping block, with the EPA's climate change page now saying "This page is being updated." The EPA said the climate change page was removed from its website to "reflect new leadership" — but it's indicative of a chilling slippery slope on the Trump administration's war on facts.

In the age of the internet, nothing is deleted forever. Whether you use the Internet Wayback Machine or take screenshots, once something has been published to the internet, you can expect it to live in perpetuity. Even the EPA acknowledges this: They've promised to link to a "snapshot" of the Obama administration's EPA website from its front page, as the agency noted in its statement.

The Trump administration's move to scrub climate change from the EPA website would be laughable if it wasn't so alarming: Just because the website got an update doesn't mean that climate change is no longer a critical environmental issue, or that it never existed in the first place. The EPA website climate change updates under Trump amount to nothing more than an administration sticking its fingers in its ears and singing, "La la la! I can't hear you!" And it's downright dangerous.

Here's what the EPA climate change webpage looked like the day before Trump took office:

While there are plenty of valid critiques to be made about the Obama administration, at least it wasn't in complete denial that climate change is real, it exists, and that the world needs to act. Now that Trump is in office with Scott Pruitt installed as EPA administrator, America is moving away from a path of both awareness and action on climate change. In the EPA statement, Associate Administrator for Public Affairs J.P. Freire said:

As EPA renews its commitment to human health and clean air, land, and water, our website needs to reflect the views of the leadership of the agency. We want to eliminate confusion by removing outdated language first and making room to discuss how we’re protecting the environment and human health by partnering with states and working within the law.

It was not clear from the EPA's statement, nor the current climate change page (or lack thereof), what the exact timeline will be for completion of the page's updates. Likewise, a representative for the EPA did not immediately return Romper's request for comment on the matter.

What's most alarming is that while the EPA and White House administration claim these changes are being made to "eliminate confusion," they are in fact obfuscating efforts to tackle an issue grounded in scientific fact. As Mark Hertsgaard observed for The Nation, the world has already passed the point of no return when it comes to mitigating climate change's effects, and Trump's deflections from the realities of climate change does nothing to actually stop it:

Climate change is not like other issues. Terrible, terrible suffering and damage could result from Trump’s policies on immigration, abortion, economic inequality, and more. Those policies, however, can eventually be reversed and the suffering eased. Not so with climate change. There are points of no return— in fact, we’ve already passed a number of them.

Here's the bottom line: Removing references to climate change from the government websites, deleting a whole climate change webpage, or letting that page lavish "under construction" for the foreseeable future does nothing to advance policy or action on the actual issue of climate change. Science is not subjective. Facts are facts. Just because Trump may not agree with the science doesn't make the science — and catastrophic consequences — of climate change any less real.

No, Mr. President. The scientific fact of climate change is not bullsh-t. But the way your administration has decided to ignore it certainly is.