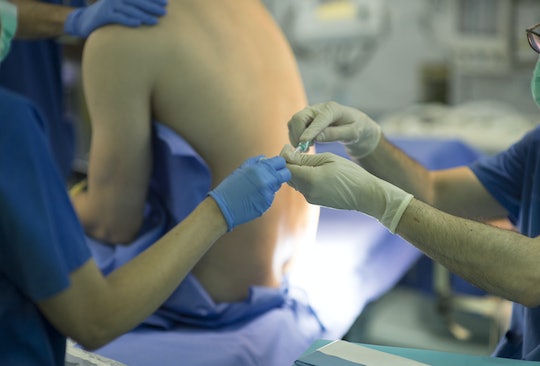 Turns Out, Epidurals Don't Slow Down Labor Like We Thought

Before I gave birth to twins in 2012, I was certain that I wanted a full-on "crunchy" labor and delivery when the time eventually came. I read books and watched documentaries about midwives and home births and the dangers of unnecessary medical interventions, and I definitely romanticized the idea of a drug-free childbirth experience. That all went out the window though when I had a high-risk pregnancy that ended in an extremely pre-term delivery at 25 weeks (when the value of medical intervention quickly became clear). So for those still on the fence about getting an epidural, a new study shows that epidurals don't slow down labor like experts previously thought. So if concerns about drawn-out deliveries are leading you to opt out of pain relief when you'd otherwise be saying yes to the drugs, this study is probably one you'll want to pay attention to.

It's long been thought that administering epidurals during labor could end up lengthening the labor process, and it's one reason why some women decide to skip out on receiving pain relief when giving birth. But according to The New York Times, a recent study in the journal Obstetrics & Gynecology found that, actually, epidurals don't appear to have any effect on the average length of labor. What's more? Getting an epidural also doesn't seem to affect the likelihood that additional interventions — like C-sections, forceps, and episiotomies — will be needed.

The study specifically looked at 400 women in labor, some of whom were administered a standard epidural anesthetic, and some who received a saline solution (aka a placebo). What they found was that both groups of women labored for approximately the same time, on average: it took 51 minutes for the women receiving the saline solution to go from full dilation of the cervix to delivery, while it took 52 minutes for those who got the epidural. Both groups had a similar rate of further intervention, suggesting that the administration of pain medication had no effect on increasing that risk. In fact, the only real difference reported between the two groups was that, well, the women who actually got the epidural reported that they were in less pain (no surprise there).

That's a pretty important finding though, because it suggests that neither doctors nor patients have to be concerned that administering pain medication during labor could have a negative effect on the outcome. According to the American Congress of Obstetricians and Gynecologists (ACOG), previous studies in years past have suggested that epidurals can increase the likelihood of a C-section delivery "as much as 12-fold," but the current ACOG guidelines say that concerns about C-sections shouldn't be the reason why a woman would opt-out of an epidural. And now, this study provides pretty good data to back up that claim.

To be sure, there are still other possible risks to be aware of when considering an epidural. Opioid medication can lead to various side effects, like itching, nausea, vomiting, and breathing problems, and can temporarily cause changes in the baby's heart rate, breathing, alertness, and ability to breastfeed, according to ACOG. There is also the chance that a rare, but serious, complication could occur, like a spinal cord or nerve injury.

At the same time, the risk of epidural side effects are low, and the obvious advantage of getting the epidural — pain relief — is a totally valid and important point. A 2012 study on the experience of first-time moms who gave birth with epidurals, for example, found that participants reported that the epidural felt like a big relief, and that it helped make their birth experience more tolerable. Many reported that the break from the pain allowed them to feel less tired and scared compared to when they were trying to labor without an epidural. And though that certainly doesn't mean that women should have an epidural, or that it will definitely improve your birth experience (plenty of women have great experiences with unmedicated births, too), it does highlight the fact that there may be real value in choosing an epidural — and that there doesn't seem to be any reason to avoid it if you actually want one.

Like pretty much everything to do with pregnancy and childbirth though, epidurals can be a pretty polarizing choice. Some women wouldn't dream of giving birth without drugs, while others are set on going drug-free. For those in the middle though, it can definitely help to know the pros and cons — and the fact that epidurals don't appear to have an effect on the length or outcome of delivery could certainly sway that choice.

As for the women who may have opted for the epidural, but feel bad or guilty for not being able to "tough it out"? This study will hopefully be a reminder that there is absolutely no shame in pain relief during childbirth, and that, from a medical perspective, there's no need to make the experience of giving birth any more intimidating than it already is.