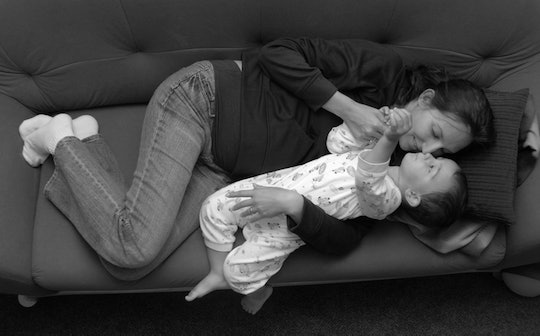 Equal Pay Day For Mothers Isn't Until June 4, & That Needs To Change

In case you're wondering whether the same goes for fathers: nope, that's not the case. In fact, being a father actually helps men's careers. According to The New York Times, research shows that men's salaries tend to receive a 6 percent bump when they have children, while women's wages decrease by 4 percent for every child they have. Controlling for all other factors — such as education, experience, and the number of hours clocked at work — didn't change the fact that mothers earn 76 cents to every dollar a father earns.

The research, conducted by sociology professor Michelle Budig, showed that the explanations commonly used to excuse the motherhood penalty don't actually explain the majority of the wage gap between moms and dads. "It is true that women decrease work effort by reducing hours or taking time away from work following the birth of a child, and that this lost experience accounts for roughly one-third of the motherhood penalty," Budig wrote for research group Third Way. She added,

Similarly, fathers do increase their work effort following the birth of their first child and this accounts for at most 16 percent of the fatherhood bonus. Importantly for both women and men, accounting for changes in work behaviors, work effort, and human capital losses/gains associated with parenthood still leaves the vast majority of motherhood penalties and fatherhood bonuses unexplained.

According to the National Women's Law Center, even though mothers make less money, they are the breadwinners (or co-breadwinners) in nearly two-thirds of American families. And the motherhood penalty doesn't apply only to mothers of grown children — its effects are seen on pregnant women and women viewed as "potential mothers," as well.

Part of the motherhood gap is understandable. Women tend to be primary caregivers, and, after pushing a baby out of their bodies, they need to rest and care for tiny humans. This can make women miss out on promotions or give them an employment gap that harms future work. But a lot of it comes down to the cultural bias that mothers will not work as hard at their jobs than fathers or employees who aren't parents will.

"This kind of discrimination is institutionalized. It's a part of the culture, it's a part of the decision-making process," Lisa Maatz, an American Association of University Women policy adviser, told NBC News recently. "Right now the assumptions about women's roles, as stereotypical as they may be, are driving decisions and those decisions disadvantage women."

To combat the motherhood penalty, there's plenty to be done, and two specific policies could kickstart change. First of all, moderate-length paid parental leave needs to be put in place and encouraged for mothers and fathers, which would not only help families but would help quash gender imbalances at work. Secondly, access to affordable (if not entirely publicly-funded) childcare has been shown to decrease the gap, allowing women to get back into the workplace before they are left behind. Research by Bundig has shown that both childcare and parental leave increase maternal wage, but only if cultural attitudes reflect a modern view of families, rather than traditional roles.

Mothers work, fathers enjoy being involved in their children's lives, and most people will choose to procreate at some point or another. It's time that public policy, and employers, stop penalizing half the population helping to carry on the human race.

More Like This
Dr. Jill Biden Just Delivered Some Frank, But Powerful, Advice On Motherhood
Reddit Applauds Mom Of Five Who Stood Her Ground & Left Sleeping Dad Behind
Sex And Mom Guilt: When I Date Someone New, Am I Cheating On My Kids?
9 Reasons Why Some Women Can't Breastfeed