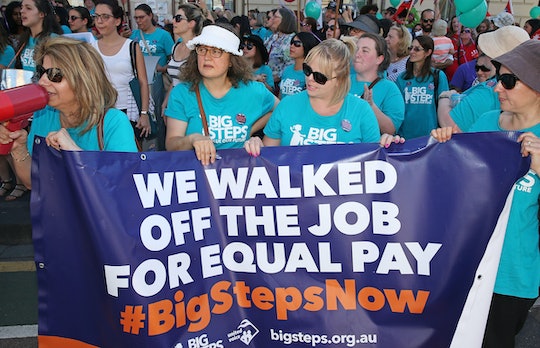 Equal Pay Day Tweets Show We Have Work To Do

It's that time of year again: It's Equal Pay Day, aka, the day in which the world realizes 365 days have passed, but women are still not making the same wages as men for the same work. There have been some victories — Iceland introduced legislation just last month that makes employers prove that they pay workers fairly — but unfortunately, some of the most powerful Equal Pay Day tweets show that much of the world is still lagging behind when it comes to compensating men and women equally.

In case you missed Equal Pay Day last year or you're not quite sure why the world is talking wages and gender on a random Tuesday in April, here's how it works: Equal Pay Day exists as a timely reminder of the wage gap that women still face every day in the workplace, where — on average — women earn only 80 cents for every dollar men make. Equal Pay Day falls on April 4, 2017 for one pretty shocking reason: because in order to earn the same amount as a man did (for doing the same job) in 2016, the average woman would need from Jan. 1, 2016 until now to catch up to the man's earnings in the calendar year.

And while the world has made some progress in 2017, some of the best Equal Pay Day tweets prove there's still so much to be done:

According to a report released this month by the National Federation for Women and Families, the wage gap is even wider for women of color, with black women earning 63 cents and Latinas earning only 54 cents for every dollar a white, non-Hispanic man makes.

Overall, women working full-time in the United States lose out on a combined $840 billion a year thanks to the wage gap, and that hurts everyone — including their families. According to the National Federation for Women and Families, if the wage gap were eliminated, the average woman could afford 15 more months of child care, another 1.2 years of tuition at university, a year and a half's worth of food for her family, nearly one more year of rent, seven months of utilities, and more than 8 years' supply of birth control. 20 cents might not seem like the biggest difference in the world, but it certainly adds up over a lifetime.

According to the World Economic Forum, women will eventually see the wage gap close — but WEF estimates place that day 169 years from now, meaning we could be seeing Equal Pay Day tweets for the rest of our lives, and well into our daughters'. Let's work hard to end wage inequality long before 2186, because women can't afford to keep losing out to the wage gap.