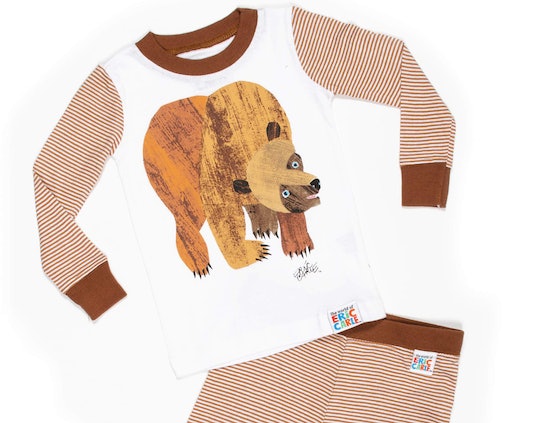 If you're a parent, you're likely very familiar with Eric Carle's A Very Hungry Caterpillar. I can quote most of it from memory. "On Monday, he ate through one apple, but he was still hungry..." and so on. It is the quintessential comfort read for children. His other books, such as Brown Bear, Brown Bear, What Do You See? and The Very Quiet Cricket are equally as iconic. What sets his books apart are the unique illustrations that are embedded in the memory of everyone who grew up reading his books. And now you can buy Eric Carle pajamas at Walmart that feature those images in bright, bold color.

The pajamas come in several characters and designs, so whether you're dressing your infant or bigger toddler, Walmart has something that will fit. Some of the images featured are of course the Caterpillar and the Bear, but also his rubber ducks, which are a personal favorite in my house. (Ducks overboard!) These adorable PJs are reasonably priced at $13, and they're 100 percent cotton. The two-piece set is designed to fit closely, and not encumber your child's sleep — or their ability to got to the bathroom. The footless pajamas are great, especially if you have a child like mine who hates having their feet covered when they sleep. ("I can't breathe when my feets are covered, Mama!")

Getting your kids ready for bed can be a real chore. They want "one more snack" or "one more story," and that's a cycle that seems never-ending. One trick I've learned in my years of parenting is the gift of the bedtime bribe. "You can put on your caterpillar jammies if you settle down," would be an apt incentive to get my little ones into bed. This hack would work even better if it was paired with a retelling of the story featured on their jammies.

A Very Hungry Caterpillar is easily one of the most strikingly illustrated books for children, so it's no wonder that its images would be reproduced on many items, especially pajamas that could be worn as the book is lovingly read to the children wearing them.

In an interview with Waterstones on the 40th anniversary of the publication of Caterpillar, Eric Carle described the process for how the book came to be. He said that one day he was playing with a hole punch and made a bunch of circles, and as those were laid out, he thought of a bookworm, and the story and subsequent images were crafted from that little idea.

The Eric Carle pajamas at Walmart are a celebration of his stories, his artwork, and his dedication and contributions to the canon of children's literature. With over 45 books written, he is assuredly one of the most prolific children's writers alive today. Born before World War II in Syracuse, New York, and then moving to Stuttgart, Germany, his story is a harrowing one. It is therefore all the more surprising that his books are such beacons of joy. They evoke all that is inquisitive and joyful in children's imaginations. He anthropomorphizes creepy crawlies, gives life to bathtub toys, and makes great mythic dragons approachable.

Your children are going to love these pajamas. They'll want to race into them each and every night. I would suggest buying a few different sizes and styles so that they have longer use of their beloved pajamas, and so that you can have some in the wash and some in the drawer. It's only a pity that they don't make a matching set for the grownups, because I would absolutely rock a pair of Brown Bear pajamas. Although, all that Bear would see in the mirror is one very tired mama.