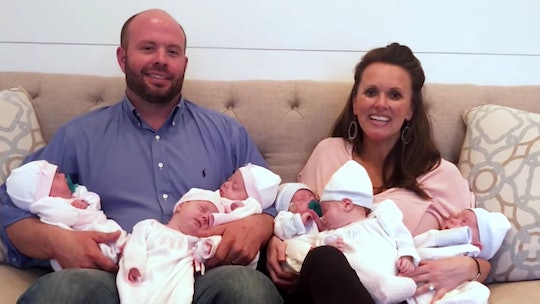 Just when TLC viewers thought family life couldn't get any crazier than Jon & Kate Plus 8, 19 Kids & Counting or OutDaughtered, the Waldrop family went and one-upped them all. This couple from Albertville, Alabama, were already parents of three young boys when they found out they were expecting sextuplets. That's six babies at once! And those who have been following along with their show weet Home Sextuplets know that Eric and Courtney Waldrop's birth story with their sextuplets beats all the odds.

It wasn't long ago that the world was introduced to the Waldrops, but viewers are now keenly aware of just how rare their situation is. During the first episode, which aired in September, Courtney and Eric explained that there was only a 1 in 5 million chance that sextuplets would happen as a result of the fertility medication Courtney had been taking. To further drive the point home, Courtney added, "They say out of 4 million U.S. births a year, only 25 are quintuplets or sextuplets — and most of them are quintuplets." So yeah. Finding out you're pregnant with sextuplets isn't exactly something that happens every day. Which is probably why the Waldrops got their own reality TV show out of their unique experience.

Before the Waldrop sextuplets arrived, Courtney and Eric were a relatively typical couple (she's a teacher and he owns a landscaping business) with three sons: Saylor, 9, and 6-year-old twins, Wales and Bridge. Courtney had taken fertility drugs when she conceived the twins because she suffers from a blood clotting disorder that makes it extremely difficult to carry a pregnancy to term, according to TLC. She actually had a miscarriage in between having Saylor and the twins, which is how they found out about the disorder.) So when the Waldrops wanted to add just one more child to their family, they again turned to this same fertility treatment. Needless to say, they were shocked to discover they would soon be going from a family of five to a family of 11.

But their journey definitely wasn't an easy one. Courtney was put on strict bedrest at 24 weeks along — only getting up to use the bathroom — and ended up being admitted to the hospital at 26 weeks for around-the-clock monitoring. The risks for pre-term birth, according to Courtney's doctor, weren't small matters; they included cerebral palsy, learning disabilities, and brain bleeds, among other complications.

As Us Weekly reported, Courtney expressed her anxieties about the process of bringing six babies into the world during the second episode of Sweet Home Sextuplets. "My biggest fear is that something is gonna be wrong with the babies or something is going to happen during the surgery,” she said just hours before having a C-section at 30 weeks pregnant. “I worry about something going wrong.”

Thankfully, all six babies and mama made it safely through the C-section with the help of a team of about 40 healthcare providers, according to People. Courtney delivered three boys and three girls — who all weighed under 3 pounds each — on Dec. 11, 2017: Tag, Layke, Blu, Rivers, Rawlings, and Rayne, according to Us Weekly. Although the girls ended up coming home a couple weeks earlier than their brothers (and Layke, as it turns out, has a heart defect that ultimately needs surgery), by February, all six babies had come home from the NICU, according to TLC.

These days, Courtney and Eric are busy keeping up with their 9-month-old sextuplets, in addition to their three older boys. And their Instagram updates are basically the cutest things ever. (I mean, what could be sweeter than a box full of smiling babies?)

Against all odds, the Waldrops conceived — and were able to bring home — all six of their babies. I think it's safe to say these little ones are nothing short of miracles — and from experience, watching their journey unfold on Sweet Home Sextuplets is endlessly fascinating. Be sure to follow the Waldrops on Instagram and tune into TLC at 10 p.m on Tuesdays to keep up with these little cuties.

This article was originally published on Oct. 6, 2018