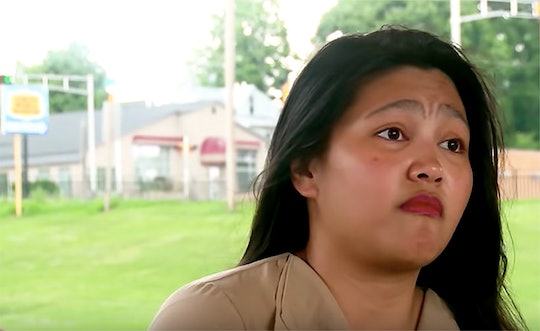 Eric and Leida's relationship on 90 Day Fiancé took a major nosedive on Sunday's episode. The drama started when Leida asked Eric to abandon his young kids in order to get rid of his child support payments. When Eric refused to give up his parental rights, Twitter collectively cheered.

In case you don't know already, Leida's family is loaded. Leida tends to remind viewers of this fact any chance she gets, like the time she casually mentioned how her first wedding cost $300,000. Say what, now?

Given Leida's luxurious past in her native home of Indonesia, it's no surprise she has high standards for Eric. The mom-of-one wants Eric to upgrade his modest apartment ASAP, and she wants the best of the best for their upcoming wedding.

Leida even expressed her disappointment with the couple's Wisconsin wedding venue, venting, according to Us Weekly: “My family are not able to come to the wedding because they disapprove. To be honest, I’m glad that my family won’t be here because they will complain a lot [that] Eric is not doing a good enough job again.”

But the wedding was just the tip of the iceberg. When the couple went furniture shopping, Leida exploded after Eric refused to pay for a new and expensive bed set.

“I don’t want to get married,” Leida said, according to Us Weekly. “I’ll just give the ring back to you. Let’s just end this.”

To be fair here, Leida did have some right to be upset as the bed was for her 5-year-old son, Alessandro. Leida's son was sleeping on a makeshift bed up until that point because Eric's apartment wasn't equipped for his arrival.

Leida's solution to the problem, however, was incredibly unfair. She asked Eric to give up his parental rights to avoid child support payments for his 11-year-old daughter, complaining that she's "baggage" and a "burden." You guys, I can't.

Eric, who finally had enough of Leida's continued pressure regarding his child support payments, shot back, according to Newsweek: “What will make you happy? Me giving up my parental rights or me giving you a $1,000 a month in your pocket?”

After Leida told Eric that she "deserves" both (I need some blood pressure medication, stat), the argument reached a pivotal point.

“You don’t deserve me giving up my children,” Eric added, while also reminding Leida that his child isn't a burden.

“Then don’t get married with me then,” Leida replied, according to Newsweek.

Still, Eric stood strong in his allegiance to his child. “Then you’re going home because I refuse to give up my child,” he said. “I don’t care how much I love a person I can’t put them before my kids. I do wonder if the green card is what it was all about. It makes me feel sick. This is over.”

The general response to Eric's line in the sand is overwhelmingly positive.

"Thank you sweet baby Jesus, Eric isn't as big of a douche as I originally thought!" one fan wrote on Twitter.

Another person commented: "Eric finally snapped out of that trance he was in."

"Good for Eric! I'm sure if the tables were turned Leida would also be asking for child support," a commenter chimed in. "Interesting how a mother can't respect the fact that a father wants to be in his children's life."

A fan penned: "Honestly so proud of Eric. How could somebody be so spoiled!!!"

Well, here's to hoping Leida eventually understands why Eric's daughter is a top priority. If not, it looks like these two have a difficult road ahead.